In 2016 Council embarked on an ambitious journey to consult with the local community on their long-term goals for the District. Project Thrive is now the backbone of Council and provides the strategic direction behind the significant investment in people and infrastructure to support the growth and aspirations of the District.

How did Project Thrive begin?

After the election in 2016, with the arrival of a new Mayor and six Councillors to join two incumbent Councillors, the clear message from the people of Central Hawke’s Bay was that there was a need for a new approach to delivering value for our community.

With that in mind, Mayor Alex Walker led a values-based brainstorming session with the elected members. The purpose was to work closely together to articulate the common direction and values that they wanted to underpin how they led, approached issues, and governed. This then led into the expectations on the management of the organisation. It also recognised that for effective change to happen in their district they needed the community behind them, and that they needed to take a long-term view. Six simple, but powerful words about the elected member’s expectations of themselves and others – translated into the beginning of a new values-based strategic framework for Central Hawke’s Bay. This has, and is continuing to change the value people in Central Hawke’s Bay District are seeing from their District Council.

There was a real will to lead in partnership with the Community – to bring the community back into Council in a genuine way – and to create a transformational strategic direction for the District. Out of pure coincidence, the first letter of these six words created the word “Thrive” and the start of a new and exciting community based visionary exercise for Central Hawke’s Bay.

In addition, while coincidental, that word “Thrive” cleverly reflected the prosperity, positivity and energy that elected members aimed to inspire within the community.

Council knew how important it was to have a good understanding of what the people of Central Hawke’s Bay value and to give the community an opportunity to influence the direction and priorities of the District in a proactive and tangible way.

Taking it to the Community

In February 2017, the Central Hawke’s Bay District Council commissioned Urbanismplus Ltd in to work with the elected members to facilitate a community consultation and workshop process to reflect the new leadership’s aspiration to see the community Thrive.

An important step for recognising the long-term view required for creating sustainable change was to use “Project Thrive” (as it became known) to replace the 2017-2018 Annual Plan process. It was also to become the important pre-engagement to the Long Term Plan for 2018-2028. This change in approach was challenging to both Councillors and the Community, as a largely conservative rural constituency had to let go of the tradition of Annual Plan submissions and public hearings in favour of a new and unexplored engagement model. 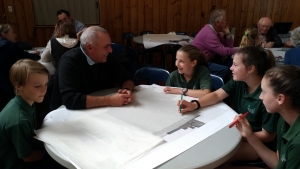 In April 2017, we went to the communities of Flemington, Omakere, Ongaonga, Otane, Porangahau, Takapau, Tikokino, Waipawa, Waipukurau as well as Iwi, community leaders and Council staff. We asked what people loved about our District and our home, what a Thriving Central Hawke’s Bay would look like, and what was holding us back from that. Feedback was also encouraged via online media channels.

This involved a comprehensive engagement process with an energy and integrity for “listening” that the Central Hawke’s Bay Community had not experienced for some time.

The consultation asked for feedback on the District now, as well as the vision for the future. The questions asked were as follows:

These community consultation sessions resulted in 70 A1 sheets of feedback, with included more than 3500 comments and ideas from across the community. Urbanism Plus consolidated this into consistent themes and potential initiatives we could pursue.

We then held technical sessions with Council staff, facilitated by Urbanism Plus, to supplement possible initiatives developed from community ideas with any required Council actions from a legal or functional perspective.

Across the feedback, common themes began to emerge across communities and demographics. The strength of the existing community and the desire to maintain and improve community connections and cohesion was the most popular idea. 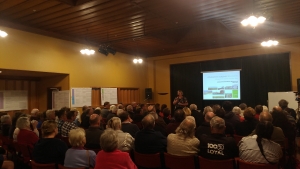 In May 2017, we presented the outcomes of the consultation sessions back to the community. This included an overarching community aspiration and seven key themes, which were consistently raised by community. This touchpoint with the community was pivotal for us to know that we were on the right track for success and was met with overwhelming positivity.

These themes then become part of a framework for prioritising the initiatives and ideas that we had collected.

Sixty-seven initiatives were matrixed against the number of connections to each theme (increasing their relevance with more connections), and then prioritised against the transformative potential they held compared with the ease of implementation.

Initiatives could then be placed in the appropriate work-streams to take them forward. The result of this method was a strong, community-informed process that ensured we had clear priorities that could be articulated strongly to both staff and community.

Project Thrive gave a voice to the community. Their input and feedback, has enabled clear direction for elected members on a community vision, which has meant Governance can now effectively lead a new strategic vision for Central Hawke’s Bay.

To read the outcomes of our consultation please click here for the report, and here for further detail and appendices.

Business on a page

In September 2017, we launched a new 'Business on a Page' for Central Hawke’s Bay District Council. This describes the cornerstones of our long-term strategy, why it is important to us, and how we will do it. These statements describe how we will lead as governors.

While simple, this Business on a Page has proven to be an effective tool to drive governance, strategy and leadership – becoming the cornerstone for organisational culture change, and policy, process and investment decision-making. It is now part of everyday language and at the centre of how we interact with each other.

We continue to use these fundamentals to drive how we communicate and interact with our community. As part of the Long Term Plan (that Council has just completed consultation on), we incorporated the objectives and key areas of focus in the community outcomes expected from Council over the next 10 years.

To read the Business on a Page, click here.

The community outcomes and key areas of focus described areas of transformation in Central Hawke’s Bay. 67 initiatives were identified that align with these areas. These initiatives reflect the many great ideas about how Council could spend our energy and resources to ensure Central Hawke’s Bay thrives. The most transformational projects have driven the key priorities that we have just completed consultation on as part of the Long Term Plan 2018-2028. Remaining projects have been actioned quickly to show the community we were genuine in our engagement.

One of the strongest messages we got during Project Thrive was the importance of water to the future of our District. Combined with strong signals for economic, business and population growth from both our urban and rural residents, this has driven the review of our investment in our Three Waters infrastructure over the next 30 years.

As a result, we re-engaged with the community in November 2017 on #thebigwaterstory – a chance for us to check-in with the community to see that we had heard the community right and were on the right track. The feedback was supportive of the capital programme we were proposing. This was then included in the consultation document as part of the Long Term Plan.

While the #thebigwaterstory, driven by Project Thrive, is our key priority for Council, we are balancing this with other transformational initiatives to build pride, prosperity and environmental protection. This has been included in our Long Term Plan for consultation a desire to:

Project Thrive brought the whole community together. It was able to effectively connect with the diverse community we are in Central Hawke’s Bay, enabling meaningful community conversations and partnerships. 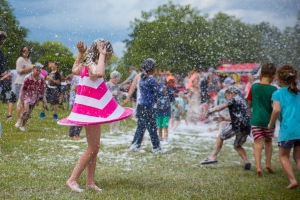 When we started, we knew we needed to drive, articulate and deliver on a strategy and vision for Central Hawke’s Bay – more than ever though we needed to take our community on the journey with us. Project Thrive was completed because of the absence of a vision and strategy for Central Hawke’s Bay and a very strong desire from elected members and community to ensure a community-led approach was taken to determine that vision and strategy.

The Project aimed to connect with the community on what mattered to them and what their aspirations were for the future of Central Hawke’s Bay. Project Thrive achieved a prioritisation of strategic opportunities that in turn has supported and influenced investment decision-making.

A new Council table took enormous risk in presenting to the community a new approach to community engagement and the development of a vision and strategy. The success of Project Thrive has been in the overwhelming support and positive feedback to the process, and more importantly the tangible results the Council and community are seeing. The Council table challenge and engage in decision making against the vision and values now set.

While the project has been highly successful, the learnings have come not so much in the project itself, but now the bold and courageous decision-making that is required to deliver on the community expectations that we have created.

The vision that has been set is now alive in the organisation and remains responsive to the communities involved in its creation. Ongoing and persistent communication with our communities is what brings the vision to life outside of the walls of Council. This also ensures that the vision is dynamic and not stagnant and can respond to challenges. Major events have not in the term of this Council meant that the vision has had to react, however the team is confident now, given the process undertaken so far, that it could.

While we have a long way to go in delivering on our vision, objectives and transformation moves, we are recognised within our community for our bold and courageous leadership, and are professional and purposeful in our governance approach and are determined to deliver.