History of Empire Gardens and Grounds

Did you know that besides the Empire Hotel there was the Empire Gardens and sportsgrounds. The hotel was where the Super Liquor and Waipawa BP now stand and many people would get their photos taken with a backdrop of the gardens. The gardens and sportsgrounds covered the area that is now the tennis club and the Waipawa Primary and were accessed via the now alleyway that crosses the railroad by the CHB Museum. 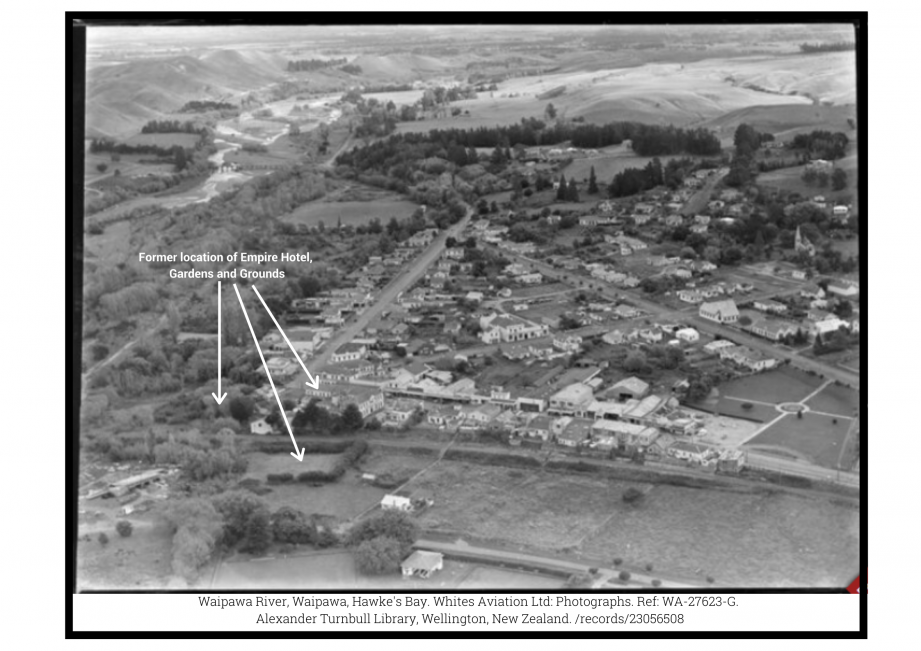 Margaret Gray has compiled the following bit of history, with newspaper articles referring to the fire as well as football games and tennis, and more.

It’s difficult to ascertain with any acuity when Mr. Thomas Cowper built the first Empire Hotel, presumably the mid 1860’s, this was situated in High Street where Super Liquor now stands. Thomas sold the hotel to Henry James Baker (1842-1888) around 1870.

Harry as he was known was born in Essex, UK in 1842 and later immigrated to New Zealand. He married Jessie Scrimgeour from Waipukurau in 1863. Their eldest daughter Isabella married Herbert Rathbone in 1895. Herbert became Mayor of Waipawa in 1921, until his tragic death in 1928. Their son Harry Rathbone was also mayor of Waipawa.

Henry James Baker was involved in a number of business ventures, many related to the hotel trade. This included Waipawa’s first brewery situated on the right had side of the Tikokino Road just short of the road to the cemetery. The creek that meanders past the cemetery, flowing under the road to join the river is named Brewery Creek. But, perhaps he is best remembered for establishing the beautiful garden attached to the Empire Hotel. The gardens extended down to and included the present Lawn Tennis Club and Bowling Greens. The magnificent Oaks, Chestnuts and Walnut trees that now grace the area were in fact planted in the Empire gardens.

From the Waipawa Correspondant in Hawke's Bay Herald 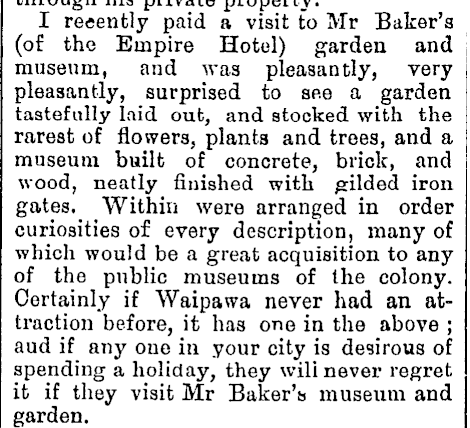 To reach the gardens one went through a gate at the top of the alleyway by the now Settlers Museum and across the railway line. Today it is still used as a short cut to Harker Street. As the years progressed and the trees grew the gardens appear to have been a favourite background for countless photos of family groups, bands and sporting teams, as well as being a place of charm and beauty.

The Hotel and land covered 16 acres, which as well as the large gardens included most of the area where the present primary school is situated, referred to in those days as the Empire Grounds. This where the very popular sports meetings were held.
In 1884 Harry sold the hotel and surrounds to his brother in law A.C. Scrimgeour. 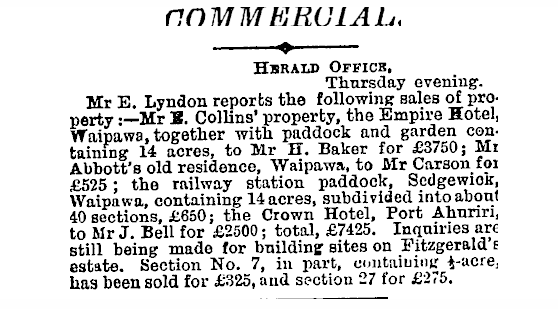 In 1886 the hotel was destroyed by a fire that consumed a substantial portion of the main street, including the then Post Office, BNZ Bank and a number of shops.

Fortunately by November 1888 these buildings were rebuilt and to the relief of the residents of the town in January 1888 the Waipawa Volunteer Fire Brigade was formed, culminating with the arrival of the new fire engine. The engine’s, its first home was a large shed at the rear of the Empire Hotel. Finally in 1902 the fire station was constructed next to the now, Municipal Theatre.
Sadly the Empire Hotel was again reduced to a gaunt shell after a spectacular fire on Easter Sunday 1961. 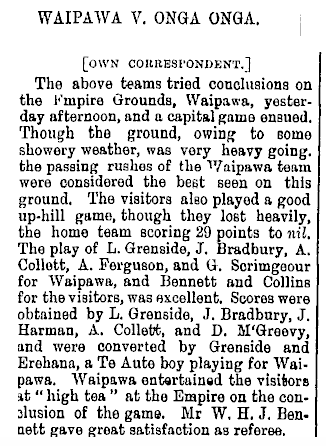 From Abbotsford- A History of Waipawa, page 142 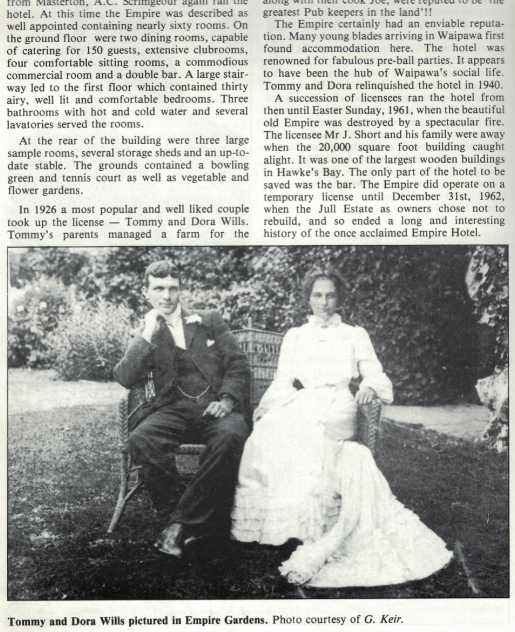