Information about rating valuations, rating components, and objections to your valuation

Every three years, we revalue all properties in Central Hawke’s Bay – all councils in New Zealand are required by law to do this. Our last revaluation was in 2018.

The most recent valuation assessment work was delayed, due to complexities caused by the 2021 Auckland Lockdown. 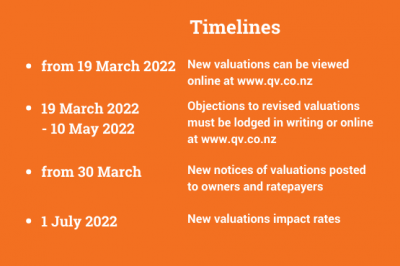 A rating valuation is a three-yearly assessment of a property's value in relation to current market values – effective as at 1 September 2021.   The new values do not impact rates until 1 July 2022.

You can now see your new property value online. New notices of valuation will be posted to owners and ratepayers from 30 March 2022.

To see a property valuation, visit the Quotable Value website Here and enter the address to find the new property value. Alternatively, the districts Valuation Rolls will be open for public inspection, free of charge, during regular office hours at Councils Offices in Ruataniwha Street, Waipawa.

To make an objection, see the information in the FAQ’s below.  Objections must be received by Quotable Value by 10 May 2022.

The new values are based on the most likely selling price if the property had sold on 1 September 2021.

Why has my property been valued?

Every Council in New Zealand must complete a revaluation of all properties in its area at least every three years in accordance with the Rating Valuations Act 1998.  Central Hawke’s Bay District Council’s last revaluation was in 2018.

Who is responsible for the revaluation?

What are Rateable Values?

Rateable Values are used as a base for setting general rates, land transport rates and stormwater rates.  Every District property has been valued as at 1 September 2021.  Any further market increases after this date can’t be taken into account.  Rateable Values are comprised of three components:

Capital value – the probable sale price for the property on 1 September 2021.  This doesn’t include chattels.

Land value – the probable price paid for the land on 1 September 2021.

Value of improvements – is the difference between the capital and land values.

Rateable Values are not designed to be used as market valuations for raising finance or as insurance valuations.

QV’s systems and processes are independently audited by the Valuer-General.

How have the new values been determined?

QV reviews all sales over recent months then using mass appraisal techniques has applied these to similar properties.  They’ve also reviewed properties for which building consents have been issued.   Owners of non-residential properties have been surveyed to obtain up to date information about rental income.

If my property value goes up - will my rates go up?

Revaluation doesn’t affect the amount of money we collect from rates - it helps us work out everyone’s share of rates.

If you choose to object to your property value, you may receive rates bills in 2022 before the outcome of your objection.

You can rest assured that if your value changes as a result of your objection, we will backdate the changes to your rates accordingly.

What have been the average changes in values over the last three years?

Residential property and lifestyle property (particularly those situated close to town) values have increased significantly, with much of the growth being driven by land value increases, and section prices at unprecedented levels.

While rural and commercial properties have also increased in value, the average increases have on average been much less than urban properties.

This has caused a shift in the underlying rating database which is used to spread the rates burden across the district. For example in 2018 the rural sector bore 69% of the Land Transport Rate (because it accounted for 69% of the total districts land value), this has fallen to 64% in 2021. While on the flip side residential properties in 2018 made up 13% of total land value, they now make up 19%.

As house prices have continued to rise over that past 3 years, there has been a trend to seek out what was traditionally affordable towns across Central Hawkes Bay as people have become priced out of main urban centres. This has caused towns such as Ongaonga and Tikokino to increase in value faster (in percentage terms) than Central Hawkes Bay’s main townships of Waipawa and Waipukurau.  While properties in these township still remain more affordable than the main towns, the relative gap has closed.

What else impacts on the rates calculation?

Your property’s capital and land values are just one of the elements used to calculate your share of the Districts rates.  Properties are also charged ‘targeted’ rates – rates that relate to services available to your property.

The new values will be used as the basis for setting and assessing rates as from 1 July 2022.

At the 6th April Council meeting it is planned that Council will adopt the draft Annual Plan for 2022/23. The annual plan is a updated version of year 2 of the Long Term Plan adopted last year.  Later in April we will provide information showing what your rates are proposed to be for 2021/22.

How do I object to my rating value?

If you believe the new valuations for your property do not fairly represent its market value as at 1 September 2021 you’ve the right to object.   Objections must be received by Quotable Value by 10 May 2022.

Details showing how to do this can be found:

-          on the reverse of your enclosed Notice of Rating Valuation

-          By post, objection forms are available from Central Hawke’s Bay District Councils Offices and should be posted to:

How do I make enquiries?

If you wish to find out more about your rating value and compare it with others in your neighbourhood, you are able to look on the QV website www.ratingvalues.co.nz.