Details on the Council owned movie theatre: the Civic Theatre. 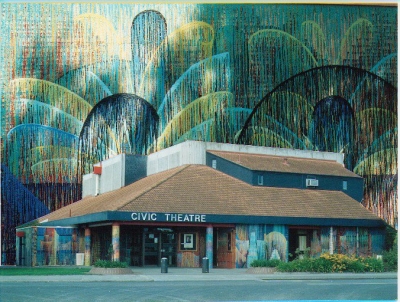 The main cinema seats 260+ people, and is equipped with the latest digital-cinema technology, the largest screen in Hawke's Bay, Dolby surround sound, and has a system for the hearing impaired.

The complex is run by Sereena & Donald Parkinson, showing movies, and also operating from the complex Latitude 40 South Cafe and Roaring Forties Takeaways.

​They also hold a number of movie fundraisers, and if you are interested in running a fundraiser for your club or group, please contact;

Designed by Hastings architect Peter Holland to replace the old Municipal Theatre in Kitchener St which had to be demolished after being declared an earthquake risk, The District council, led by the chairman John Nairn, senior managers Fred Spinley and Mike Jarvis were the main instigators behind the new building. The theatre opened on 12 November 1981 and was managed by George Mitchell for the first 17 years. In 1999 Jim and Sandra Shand leased the theatre and negotiated a performance based contract to provide cinema services to CHB residents. Mitchells Restaurant was added in 2002. In 2014, Full House Entertainment took over and rebranded the cinema "The Picture House". 2016 Donald and Sereena took over the running of The Civic.