Information on the CHB Municipal Theatre from 'Abbot's-Ford: A History of Waipawa' by Margaret A. Gray 1989

The Waipawa Borough Council was formed in 1908 and among their first tasks was to decide on an offer made to the old Town Board by the Trustees of the Loyal Abbotsford Lodge to purchase their Oddfellows Hall and property in Kenilworth Street.

The new council resolved to purchase the section and buildings. The purchase price was 1150 pounds to be paid off in yearly instalments of 100 pounds. In January, 1909 the Mayor arranged to prepare a ground plan of proposed additions to the Town Hall. All the timber used in the rebuilding project was milled at Carson's Mill in the Wakararas. Included in the timber was 1000 super feet of heart Matai tongue and groove flooring. It is also recalled the the principal rafters were assembled one at a time on the ground then hoisted into position with the aid of a pole and a horse named Topsy.

The Municipal Theatre was opened in May, 1910. No major work had been done on the building, except maintenance, until in 1956 repiling and some interior alterations were carried out.

It was between 1982 and 1984 that major alterations were completed to modernise the Waipawa Town Hall.  These alterations included structural repairs and the application of texture coating to walls and ceilings.  The original entrance way was boarded up and a new entrance way and foyer designed.  Exterior cladding was applied to the eastern and southern walls.  Toilets, bar facilities, concertina doors, carpets and curtains were also added.  Between 1995 and 1996 further repairs included carpentry work, drainage, electrical work, a partial re-roof, the installation of a fire alarm and an exterior repaint.  In 1998 the library was relocated to its present site.  Since that time the Council had only undertaken regular minor maintenance. 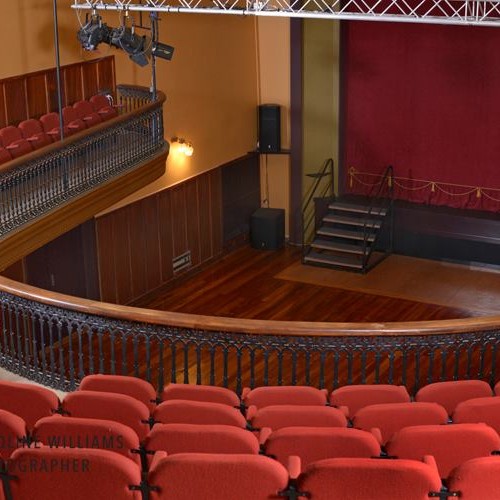 The Town Hall had, under Council’s stewardship, provided the residents of and visitors to Central Hawke’s Bay with a wonderful theatre and flat floor venue for 100 years.  However the apparent lack of theatrical design had resulted in ad hoc alterations that had an adverse effect on the building.  The Town Hall had over the years become tired; and the space was no longer able to provide for the needs of theatre attendees and the users of flat floor social spaces required in the 21st century.  In addition, there arose a need for conference and meeting facilities to be available in Central Hawke’s Bay.

In February 2010 Council approved the "Waipawa Municipal Theatre Refurbishment Project" proceeding in two stages, the first being stage one to a budget of two million dollars ($2.0 million) starting August 2010 and second being stage two to a budget of nine hundred thousand dollars ($900,000) as funds are raised.

The vision was to provide a refurbished Municipal Theatre for the residents of Central Hawke's Bay. This has been achieved by providing a refurbished multipurpose community facility for performance, teaching, promoting and nurturing the arts, meetings, conferences and weddings, while maintaining the historical character of the theatre.

Both the wrought iron balustrade and the original entrance with it interior timber largely intact are unique features of our Theatre that have been restored. The refurbishment has kept faith with the integrity of the building, which will allow continued used by the community for theatre shows and flat floor events now and for future generations to enjoy.

In refurbishing the Theatre, the CHB Council recognized the heritage of the district by returning the building to its former glory, and once again providing the community with a place of celebration for the arts, culture and heritage.

The total refurbishment project included renovation of interior and exterior walls, a new main stage, relocation of the Concert Chamber stage to beside the main stage, an increase and upgrade of toilet facilities, new dressing rooms, a new stage dock, a new kitchen, reinstatement of the original main entry foyer and the creation of a new facade at the front of the building.

The theatre was re-opened as the Central Hawke's Bay Municipal Theatre on 6 October 2012 by the Minister for Arts Culture and Heritage, the Hon. Christopher Finlayson.