The climate of Hawke’s Bay is influenced largely by the topography and the  airstreams crossing New Zealand. It is a region of highly variable and sporadic rainfall, and large and occasionally sudden temperature variations. Hawke’s Bay is a sunny region with most areas having over 2000 hours per year. Hawke’s Bay is less windy than many other coastal areas of New Zealand, experiencing a high frequency of very light winds. Consequently, a large number of frosts occur during the cooler months of the year. Much of the rain in Hawke’s Bay occurs when the wind directions are predominantly easterly or southerly. Rainfall is extremely variable in spring and summer when westerly winds prevail over the country. In most years insufficient rainfall (dry spells) results in a total depletion of soil moisture to the extent that plant growth ceases. The high country areas of Hawke’s Bay are exposed and gales occur frequently. Showers of snow are frequent during the winter months in cold southerly conditions. (Information courtesy of NIWA) 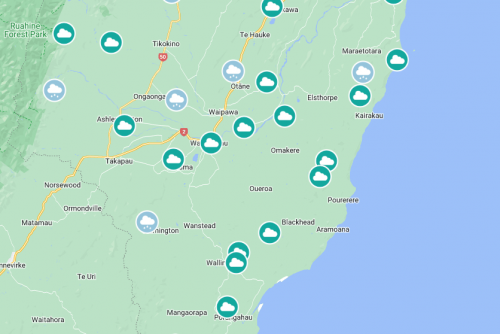