COVID-19 for updates on Council facilities and services plus locations for Vaccinations in Central Hawke's Bay Read more »
Keyword: #waipawawaterfirefighting

Council has developed a works programme, details are outlined below, and updates will be added as the project progresses.

All the approximate 600m of 280mm water pipe is installed from the reservoir to the intersection of Matthew and Abbottsford Road.

Focus now goes on fusing the strings of pipe together, testing and preparing for the further four connections needed. A couple of relatively large shutdowns are required to replace the old AC and CI mains.

The completion of this project is planned for late March 2022.

Slow progress on this project as we prepare for a number of connections on Abbottsford Road and Reservoir Road.

As part of the firefighting programme and Stage 5 of the Tikokino/Abbottsford AC main upgrade, 2800mm of dual main will be installed down from the reservoir to meet Stage 3 (Tikokino Road ending at the Abbotsford intersection).

Pipe welding is underway this week for the pipes being replaced from the Abbotsford Reservoir through to Abbotsford Road and to the Matthew Street intersection. This will see a larger reticulation pipe installed, and a larger trunk main installed both 280mm in size. 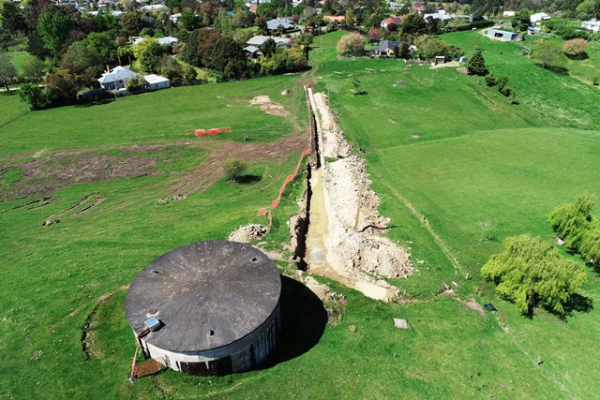 Russell Roads have started light service exploration on Abbotsford Road looking for the mains in preparation to install an up sized water main as part of Stage 1 of the Waipawa mains upgrade for firefighting and growth improvements. 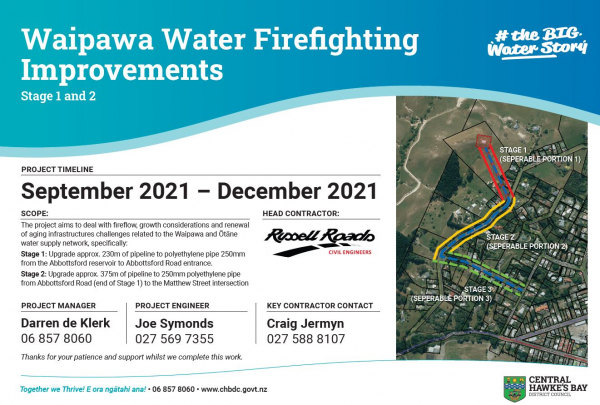 Council with our partner WSP have developed a work program to renew the existing AC pipe along Tikokino Rd (Phase 1 Stages 1,2 and 3), and improve resilience of this aging infrastructure aligned into the Second Water Supply program of work. In August Council further supported the addition of replacing the rising main renewal up to the reservoir location (Phase 1 Stages 4 & 5). Instead of following the current AC pipe route running behind private land, this is intended to run up Abbotsford Rd providing better operational access to the supply.

At the same time, the firefighting and shortfall in reticulation project supported by our partner Stantec aims to deal with challenges related to the Waipawa and Ōtane water supply network. The first stages of this have already been tendered and awarded to Russell Roads, with an intent to commence mid-September starting at Stage 1 from the Abbotsford Rd reservoir, leading on to Stages 2 and 3 down through Matthew Street. 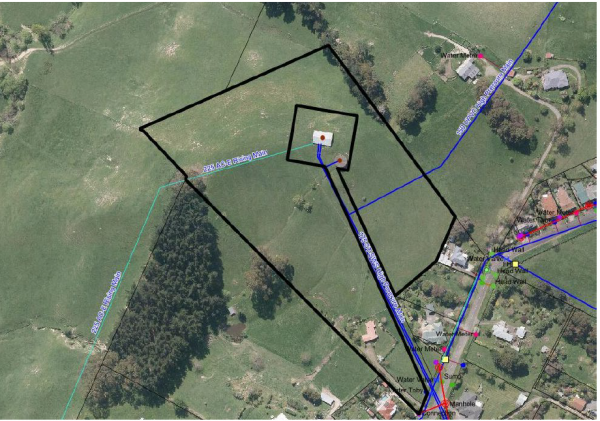 These two projects have been broken down to many stages to align with budget set aside in Council's Long Term Plan. With an overlap of construction work, and in an effort to reduce community disruption, Council is combining some of these projects in a ‘dig once’ approach. Subsequently the rising main design is in part being accelerated, and from the reservoir down to Matthew Street is intended to form part of the overlapping Russel Road contract. This section is called Waipawa Firefighting Stage 1 and Stage 2 and Second Supply Phase 1 Stage 5.

Council have awarded the contract for the first three stages of this project to Russell Roads. Later this week an initial site walk over will be completed with staff from Council, Russell Roads and Stantec. This will enable Council and Russell Roads to further generate a site programme of works to deliver the project, with works expected to commence 21 September 2021.

Council with our partner Stantec has developed a work programme to improve firefighting and growth across Waipawa.

The firefighting and shortfall in reticulation project aims to deal with challenges related to the Waipawa and Ōtane water supply network, specifically:

The project has been broken down to many stages to align with budget set aside in Council's Long Term Plan.

The first three stages are proposed as follows;

A tender is currently out to construct the first 3 stages. A map detailing where the first stages will take place is below. 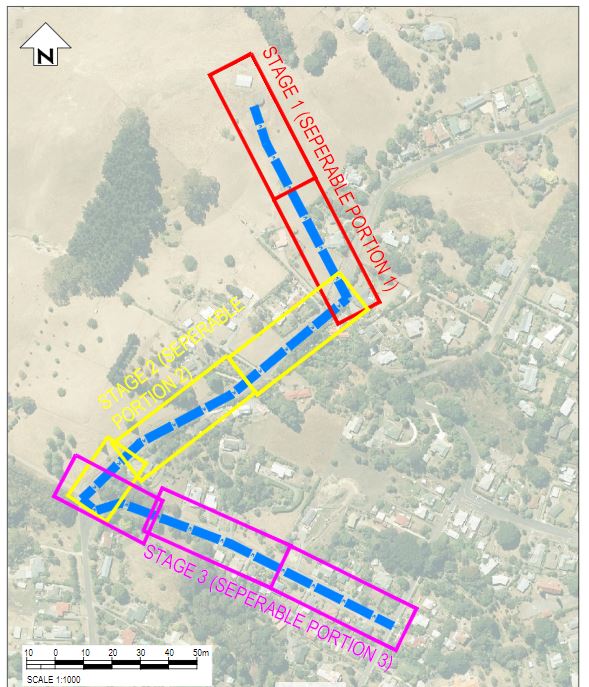 The design has been finalised and tender document is due to be released shortly.

Summary of recommended upgrades is shown below; 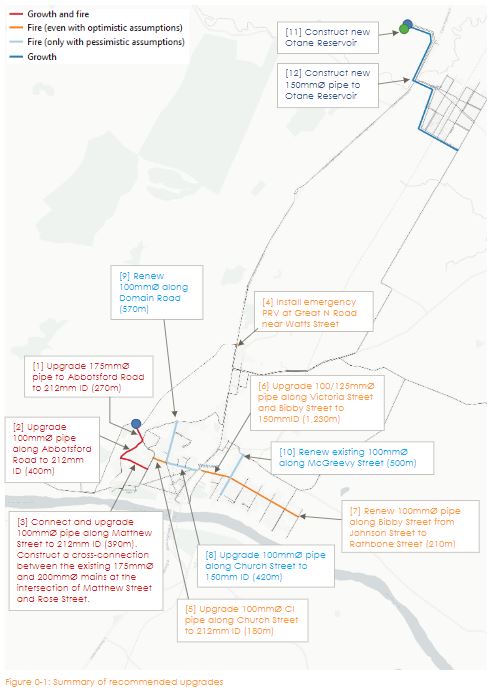 This is only used during periods of high demand to ensure supply is maintained to the eastern side of Waipawa. Consented outtake of 21,168m3/day in a 7-day period at no more than 35 l/s.

Water from the Tikokino bores is pumped to both the Waipawa Reservoir on Abbotsford Road and the Otane Reservoirs. An emergency PRV is in place to bypass the Otane Reservoirs if needed and thus supply Otane from the Waipawa system. During high demand periods, Operations can turn on the Johnson Street bores to fill the Johnson Street Reservoir, with water subsequently boosted directly in the Waipawa distribution network. The demand in Waipawa consists essentially of approximately 2,000 residential users and two truck wash stations. 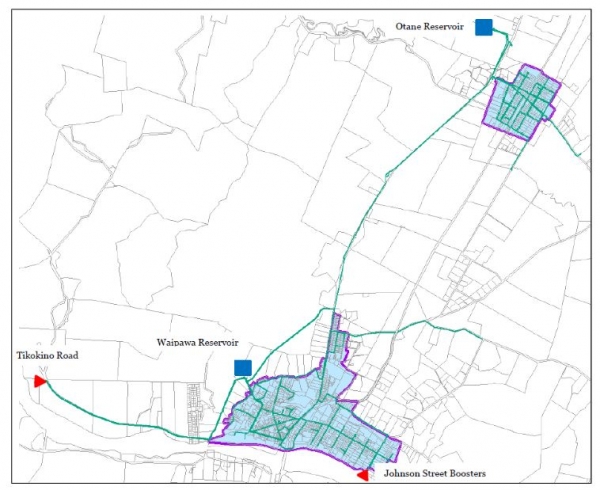