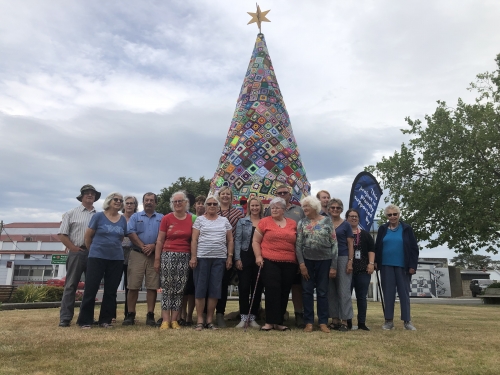 The bright and bold tree is the brain-child of the Waipukurau Arts and Crafts Incorporated Wool Craft Representative, Lesleigh Albury, who presented a small, indoor crochet tree to the group in February this year.  “What started out as an idea for a minor project suddenly became something much more” says Ms Albury.

“Once the decision to create a large, outdoor tree was made, through word of mouth we very quickly started receiving hundreds of granny squares made by locals wanting to help. The quality of the crochet has been staggeringly good.”

Officially opened by Mayor of Central Hawke’s Bay Alex Walker at  an opening celebration on Monday afternoon, Mayor Walker is proud to see the magic that community spirit can bring to Central Hawke’s Bay. “Our Crochet Christmas Tree is an exceptional example of our community talents being encouraged and enabled by the Creative Communities funding scheme.  The ladies from Waipukurau Arts and Crafts are an inspiration and their magnificent creation has truly brought the Christmas spirit to town!”

Established 50 years ago in 2020, Waipukurau Arts and Crafts Incorporated is home to a number of groups who meet to craft, chat and socialise.  Eight members of the Wool Craft group crocheted the majority of the squares, including member Jan Heyward who was instrumental in the planning of the tree. Many more crafters came on board to help with the project by crocheting, sewing, or donating wool. “There’s been a real sense of fellowship throughout this project” says Ms Albury. “We’ve come together on weekends to bring the tree to life, with lots of chocolate cake and lots of coffee to hand. It’s just been fun!”

Ms Albury describes herself as fascinated by the global yarn-bombing movement. During planning stages, the group formed a relationship with St Mark’s Parish in Farnborough, England, who have created their own version of a crochet Christmas tree locally.  In a show of global unity, a selection of granny squares crocheted by St Mark’s crafters are sewn into Central Hawke’s Bay’s tree, while in return several of the Central Hawke’s Bay community squares were sent to St Mark’s Parish.

Largely funded by the Creative Communities Scheme, the internal structure of the tree has been designed to be reused annually, with the external piece able to change year by year.  “This is a tree for everybody in the community to enjoy” says Ms Albury.  “The structure has been built to make sure it will hold the weight of not only our project, but any other project that follows.”

Waipukurau local Tom Henderson spent four months building the framework in his shed. “A lot of people will get pleasure out of this tree” says Mr Henderson. “It’s nice and strong and it’ll be able to be used again and again in the community”.

The Crochet Christmas Tree can be seen at the Green Patch in Waipukurau until late January 2020. Smaller versions of the tree are on display at the Waipukurau and Waipawa Libraries. Residents are encouraged to post photos of themselves in front of the Christmas Tree to social media, using the hashtag #merrystitchmasCHB.