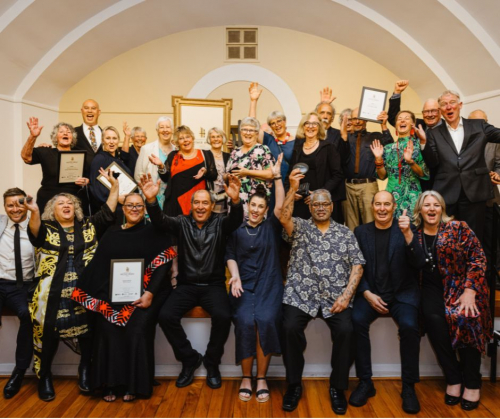 The efforts of those working hard to restore and keep the stories of Tamatea - Central Hawke’s Bay alive were recognised this week, with the district taking out the supreme award, three major category awards and a highly commended at the inaugural Hawke’s Bay Heritage Awards.

Of the eight categories awarded on Thursday night, Ngā Ara Tipuna, a cultural storytelling tour of historic Pā sites in Waipukurau and Takapau, won two -  including the overall Supreme Award and the Māori Realm Award.

Central Hawke’s Bay Mayor Alex Walker said she was extremely proud to celebrate volunteers, Manawhenua and partners, whose talents and energies continue to bring the district's stories and heritage to life, for generations to come.

“To win across three major categories is an incredible feat in itself, but to be recognised with the supreme award as well, demonstrates an excellence and richness in the tapestry of history and heritage we have to share here in Tamatea – Central Hawke’s Bay," Mayor Alex said.

“From Ngā Ara Tipuna - a unique storytelling journey and partnership project with Manawhenua, to our Central Hawke’s Bay Museum and the unique Coles Bros building in Ongaonga - these are all sites that hold a special place in the hearts of so many".

"The awards recognise thousands of hours of volunteer work that happens behind the scenes in our community, and it was incredibly special to be able to celebrate their efforts and achievements across our district, together."

The Ngā Ara Tipuna Award will be making its way around the district for community members to see and celebrate, starting at Te Huinga Wai – The Knowledge and Learning Hub next week.
ENDS

The 2022 Hawke’s Bay Heritage Award nominees and winners are: