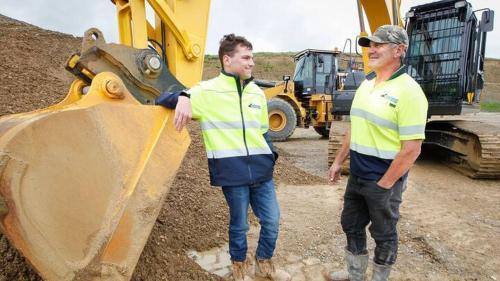 When Riley Crump-Shrouder was 3 years old, his mum Michelle Crump was told to go wheelchair shopping.

The now 20-year-old, who has cerebral palsy, was not expected to be able to walk.

Now he works operating diggers at a company in Central Hawke's Bay, for Tikokino Contractors.

Riley's cerebral palsy was a result of a medical misadventure.

When told he would be wheelchair-bound, Crump refused to accept it.

"We came across Conductive Education in Auckland. It's quite an intensive therapy where we went and spent six-week blocks in Auckland with Riley. They got him up and walking."

She said ever since then, Riley had the determination to prove himself.

"You can't tell him no, or you can't try that. He'll just give anything a go."

Riley began trying to get different jobs, but it had been difficult to find the right fit, Crump said.

Then the opportunity to work for Tikokino Contractors' boss Doug Brightwell came along.

Initially, Crump was worried her son wouldn't be able to overcome his various difficulties, which included balance and shakiness.

"You get him in the machine and his movements are so steady, and the hand controls and that, you wouldn't think he's got cerebral palsy."

Having the job has made a huge difference, she said.

"Even just getting him out of bed in the morning. He's up early. He's motivated and excited for the day."

She said a lot of it was thanks to the people who had backed him along the way and Brightwell giving him a chance.

"We need a lot more people like that around. Just to open their eyes, really."

Riley felt valued and a part of the team and Doug was a big part of that, Crump said.

"Doug involves him in what's coming up and he knows what's around the corner and knows what their plans are."

Brightwell said having Riley around was "so refreshing, seeing his progression".

"He's definitely going to be something spectacular."

He wanted other employers to broaden their horizons. "Don't throw your hands up and think, gosh, we can't do this. There's support out there to take people with disabilities on."

Riley, when asked what he liked about the job, said: "Everything. I think people need to give more people like me an opportunity. Give us an opportunity because we want to work."

Riley was also about to begin a certificate in mining and quarrying (Level 2), which involved on and off the job training.

Riley has been supported by the Mayors Taskforce for Jobs, which through Jobs in Central Hawke's Bay, set up the meeting between Riley and Brightwell.

The Ministry for Social Development organised Flexi-wage which contributes to Riley's wages while he's learning on the job.

Workbridge were able to get an adapted farm vehicle so Riley could get to where he needed to be quickly on the worksite.

Ministry eastern regional commissioner Karen Bartlett said the Hawke's Bay community had really come together to support Riley. "There is so much untapped talent and often people just need an opportunity to show what they can do," she said.

Jobs in Central Hawke's Bay lead Jono Craig said Brightwell had approached him about a year ago asking to find someone to take on in his quarry and from there it was all about connecting the dots to make it work. "It's employers like Doug we need to celebrate, seeing the potential in young people and working to unlock it and give our youth great opportunities," he said.

Jobs in Central Hawke's Bay was a community led recovery programme connecting the business community with local people seeking meaningful employment. The programme was funded by the ministry through the Mayors Taskforce for Jobs.

As of August 2022, there were 70,170 people aged 18-64 on the Jobseeker Health and Disability benefit, according to statistics provided by the ministry. In August last year, there were 81,177 on the benefit.