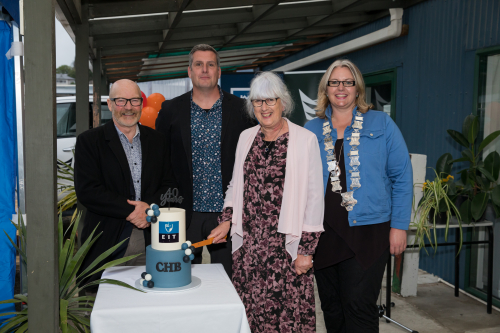 A function, which was held at the centre in Waipukurau on Thursday (22 September), was attended by EIT Chief Executive Chris Collins and the Mayor of Central Hawke’s Bay Alex Walker, as well as a number of people who have been involved in the centre over the 40 years.

“Our regional learning centres, including the CHB one, play an important role in connecting the education and skills training EIT offers with local communities. EIT is part of the regions and as we move over to become part of Te Pūkenga, our regional learning centres will continue to provide us with that much-needed connection to our communities.”

“I want to congratulate everyone who played a role in this centre achieving the milestone of being at the heart of the Central Hawke’s Bay community for 40 years.”

“EIT is vital part of our Central Hawke’s Bay community and for 40 years the local delivery at our Waipukurau site has resulted in multiple generations of impact. Residents of all ages, but particularly younger people, have had the opportunity to study and learn skills close to home which ultimately guides them into secure and valuable employment.”

“I want to congratulate our Regional Learning Centre team for their service and success and look forward to how we continue working together to embed the future of the centre in our community for many more generations.”

Glenn Fulcher, EIT’s Regional Learning Centre Manager for Wairoa, Maraenui, Hastings and Waipukurau, congratulated the centre staff on the anniversary and thanked them for their role in making it a success.

Sandra Fleming, who has been the Coordinator of EIT’s Central Hawke's Bay Learning Centre for the past 22 years, says it is a satellite centre that takes on learners who are unable to get to EIT’s Hawke’s Bay campus in Taradale.

“We take on a lot of the students who would never ever go to the main campus but will come to a regional centre because it’s a lot smaller. They may have barriers such as transport, or have had bad experiences at school, so we run a number of foundation programmes and practical courses.”

“We often feed people through to the Hawke’s Bay campus once they feel comfortable about stepping up. We also have a lot of parents who can’t be in Taradale because they need to pick up children from school.

Sandra says the centre is set up to enable learners to also connect with EIT programmes online. Among the programmes on offer at the centre are health and wellness, many te reo courses, employment preparation, basic carpentry and small engine repair.

“Recently we ran a hospitality course where the School of Tourism and Hospitality van came down. It is fully set up with a commercial kitchen and the learners were able to use all the facilities that you would need in a café.”

Sandra says the key to the success of the regional learning centre is the important relationships it has fostered in the community.

“We've got a really good relationship with the local council, iwi and other stakeholders and providers. We all look at what we can do for Central Hawke’s Bay and we're all working together for the betterment of the community as a whole.”

From 1 November this year, EIT, all of its campuses and regional learning centres; will become part of Te Pūkenga, the New Zealand Institute of Skills and Technology. Between now and the end of the year other Institutes of Technology, Polytechnics, and Industry Training Organisations will come together to build a network of on job, on campus and online learning.