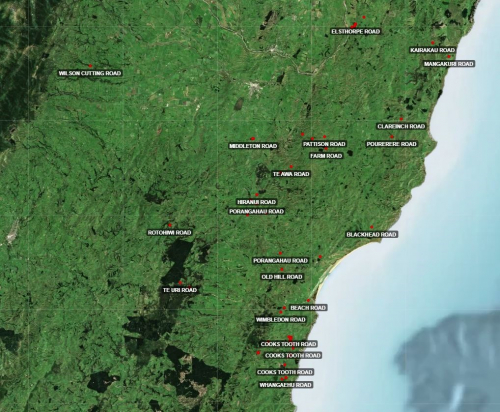 With a severe (orange) weather warning in place and heavy rain expected over at least the next 24 hours, Central Hawke’s Bay District Council is urging residents to be prepared for more road slips across the district’s rural road network.

Central Hawke’s Bay rural roads have been hammered by an unrelenting series of heavy rainfalls, strong winds, and earthquake tremors over the past three months. There is great concern that existing major damage across the roading networks will dramatically worsen with the forecast weather.

There are already 35 major slips across the district’s roading network, and the ground is at saturation point.

The damage across the district’s roading network, including 35 major slips already identified, has been described as on a scale at least 2-3 times greater than the 2011 Pourerere storm event. In that event, a State of Emergency was declared and over $11 million of damage was caused to the roads.

The current situation will only worsen in the coming bad weather.

“This level of damage and impact from recent wet weather is the worst state our roads have been in for decades,” says Mayor Alex Walker.

“The scale of what we are now experiencing across our rural road network, especially on the coast, is huge. This isn’t going to be a quick or cheap fix and we have families, communities, farms and businesses who could be majorly affected.”

Residents on roads that are vulnerable to being cut off, for example Cooks Tooth Road and Wimbledon Road are strongly encouraged to prepare and stock up in case they are isolated by road closures.

People are encouraged not to attempt to cross major slips due to risk of further collapse, and to contact Council urgently 24/7 on 06 857 8060.

Council has an annual roading budget of just over $12 million.

Initial estimates of repair costs are between $25 - $40 million.