On the road to a Waste Free CHB 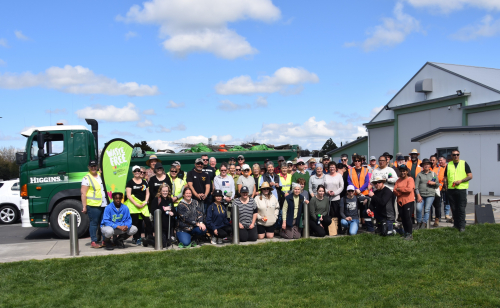 More than eighty clean-up volunteers picked their way over 5km of a temporarily closed State Highway 2 on Sunday, collecting over a tonne of rubbish in three hours.

Although much of the rubbish consisted of everyday items such as cans, bags, food wrappers, beer bottles and plastic straws, some of the more unusual items uncovered included a mattress, a Tigger soft toy, Christmas decorations and a DVD player.

Central Hawke’s Bay Mayor Alex Walker said it was awesome to have so many dedicated volunteers give their time to make our district an even better place.

“It was amazing to see so many people not only show up but put in the hard mahi to clean up our little slice of paradise so we can all enjoy a Waste Free CHB, both now and well into the future,” she said.

“While we were disappointed that we collected so much rubbish, I was heartened by the teamwork and the passion of our community to make a difference.”

The event also proved to be a timely reminder about what we can all do to reduce waste and its effect on our environment at a local level, Mayor Walker said.

“I’d ask everyone to think carefully about the impact of throwing rubbish out a car window. I encourage you all to lead by example - to teach the younger generation that being part of the solution, not part of the problem, is so important in tackling the litter problem head-on.”

Those who missed out on registering for the SH2 Clean Up can take part in a Friends of the Street Clean Up any time during Central Hawke’s Bay Clean Up Week until September 23.

Central Hawke’s Bay District Council Chief Executive Doug Tate said there is still time to get involved and make a difference in your own community by becoming a Street Champion.

“Put your hand up to become a Street Champion, get your family, neighbours and friends on board, then find a time and day that suits everyone to scour the street, road or local park for rubbish. Even though Clean Up Week ends on Friday, you can still register to get on board this weekend,” he said.

“It’s such a simple but really great way to meet your neighbours and make a real difference to your own patch.”

Interested community groups, families, businesses and individuals can find out more on our website: chbdc.govt.nz and search #Wastefreechb

We acknowledge the contribution of our key partners:

and finally, our awesome community and CHBDC staff volunteers.