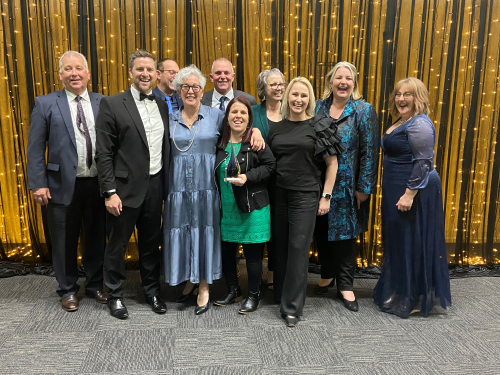 A Central Hawke’s Bay District Council employment project has been recognised nationally for its success in connecting jobseekers, community, and businesses to create sustainable job opportunities.

The Mayor’s Taskforce for Jobs – Jobs in Central Hawke’s Bay project has been named as the winner of the Martin Jenkins Excellence Award for Economic Wellbeing at the Local Government NZ Conference in Palmerston North this evening.

Another Council project, Broader Outcomes in Action – Thriving through Infrastructure, was a finalist in the same category.

Central Hawke’s Bay District Mayor Alex Walker accepted the award, acknowledging the Council team who have worked on the project.

“We’re honoured that two Central Hawke’s Bay projects were selected as finalists in the economic wellbeing category, showing that being a smaller Council is no barrier to creating outstanding results for our community.”

“Connection is the way we do things in Central Hawke’s Bay,” says Mayor Walker. “We worked alongside our community to develop the project, finding out what was required and tailoring our approach accordingly.”

“Jobs in Central Hawke’s Bay, community-led and relevant to the needs of local people, has the social and economic wellbeing of our people at its heart - and ultimately a strong, connected Central Hawke’s Bay. Everything we do is aimed at setting our community up to thrive.”

As of this week, the Jobs in Central Hawke’s Bay team has referred 742 jobseekers, 337 of whom have secured employment or training. Nearly 50 local apprentices attend weekly workshops, and the team are in regular contact with a network of over 770 local businesses.