Riding the storm - we've done it before, we'll do it again 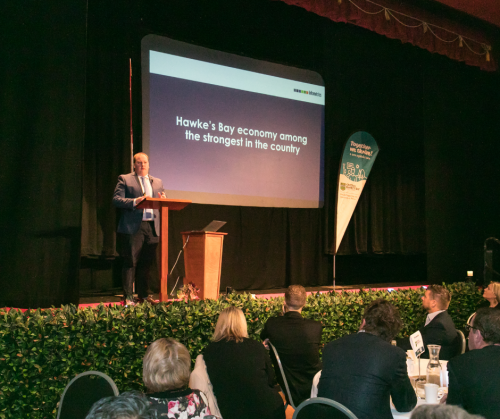 Brad Olsen, one of New Zealand’s most prominent economic commentators, told Central Hawke’s Bay business and community leaders this morning that despite uncertain times there is much to be positive about in the long-term economic outlook for the district, which has seen growth of nearly 7% from pre-pandemic levels.

Kieran McAnulty, MP for Wairarapa and Anna Lorck, MP for Tukituki, were among business, community and Mana whenua guests at a business breakfast event in Waipawa this morning.

“This isn’t the first time that Central Hawke’s Bay has ridden through a storm of uncertainty,” said Mayor Walker.

“As a district and a community, we’re incredibly resilient. We’ve overcome huge challenges in recent years, including the twin blows of sustained drought and Covid-19 over not one, but two long years.

“It’s a testament to the Central Hawke’s Bay spirit that when all short-term reports tell us we should be feeling down, we’re doubling down.”

“There has been record investment in the district, new business growth and diversification, high value horticulture expansion, and the leadership of our primary producers has been internationally recognised.”

“We’ve attracted investment in the future of Māori tourism and business with projects like Ngā Ara Tipuna, and we’re on the brink of a major announcement to see over 1,000 new properties available for homes in Waipukurau over the next 15 years.”

Brad Olsen commented: "Yes, there's a slowdown coming, but there's a sense of optimism as well. Realistically we're seeing the economy is cooking, and we need to bring it down from a rolling boil to a simmer. There's an acceptance that we need to face necessary pain to enable us to ensure we bring inflation under control, so that we can then redeploy resources across the economy for long-term growth."

Mayor Walker said the voice of the Tamatea-Central Hawke’s Bay community is being heard loud and clear on key economic and social issues.

“We’re at both national and regional tables, advocating directly with the Government and our regional partners for Central Hawke’s Bay’s interests,” said Mayor Alex Walker.

“Together with our community, we’re seeing our clear plans to succeed through Project Thrive brought to life.“