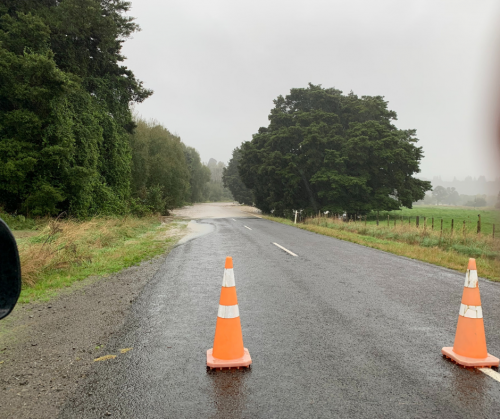 It’s a long weekend ahead for Central Hawke’s Bay residents, contractors, community organisations and council staff, as the district continues to be impacted from the severe weather event affecting the East Coast of the North Island.

Following rainfall greater than forecast falling in the early hours of Thursday morning, Central Hawke’s Bay has experienced flooding across the entire district with key roads closed, a boil water notice in place for Waipukurau and key assets impacted.  Over 300mm of rain has fallen in the districts foothills, with the main rivers of Waipawa and the Tukituki reaching one-in-50- year flood levels as they peaked in the early hours of Thursday morning.  With an already soaked district, the Central Hawke’s Bay district and the wider east coast region remains at an Orange Weather warning, with strong winds now forecast.

“This has been one of the most notable districtwide flooding events that the district has seen since 2011”, said Chief Executive Monique Davidson.  “Combined with the current impacts of COVID-19, the impact of the flood and the clean-up will be lasting for many in our community for some time.”

At its peak over 30 roads across the district were closed, with some key roads still remaining shut and the extent of potential damage under the flood waters still not clear.  A key route - Porangahau Road, is likely to remain closed until at least Saturday evening with bypasses in place around two sties impacted by flood waters near Flaxmill and Kokomoko bridges. Both of these sites are currently in the midst of construction to upgrade their resilience for flooding and when the works are completed Council are confident this level of rain would not have caused closures.  Across the remainder of the district, residents can expect roads to again close and re-open as flood waters make their way to the sea and Central Hawke’s Bay residents have again demonstrated their resilience from the coast to the hills, clearing roadside culverts and windblown trees.  Residents are encouraged to follow Councils website and Facebook for the latest roading closures and impacts.

After flooding caused the river water quality at the water intake in Waipukurau to be severely degraded, a boil water notice for Waipukurau was put in place late on Thursday evening.  Tankered potable water is available to residents of Waipukurau at Russell Park from 7am to 8pm each day until the Boil Water notice is lifted, which is not expected to be until at least late on Monday at this time.  Boil water notices were expected to be extended to the townships of Otane and Waipawa on Friday afternoon, however improved river water quality has reduced the potential of this.

While key roles will keep Councils Emergency Operating Centre operating over the weekend remotely, the recovery clean-up will not commence until next week with operational crews expected to largely remain in a response mode over the weekend addressing wind, continued localised flooding and road closures and small slips across the districts networks.  Till this time, residents are encouraged to stay away from flood affected areas and to continue to remain vigilant at all times when driving.

“This has been a major event for our community which is still underway”, says Central Hawke’s Bay Mayor Alex Walker.  “I really encourage our community to remain cautious, particularly around flood waters and to recognise that the situation could still change at short notice.”

“Once the flood waters have receded, there is still a big effort ahead for many – navigating our way through the extent of damage whether on farms or our districts roads.  We’re an outstanding community and I’m confident we’ll collectively respond to this event and see our way out the other side with confidence.”

If the weather escalates, Council has teams on standby ready to support an enhanced response. For more information follow Councils Facebook page, Councils website or listen to Central FM.   Residents should continue to report any issues across the entire network by ringing Council on 06 857 8060 24/7.