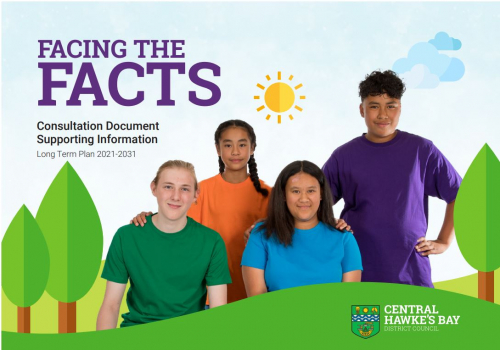 56 entries were received for the national award with Taituarā Chief Advisor Raymond Horan stating that the standard of entries has never been higher.

“I’m so proud of our Council team, that Facing the Facts has been recognised as one of the top two entries at this year’s awards,” said Monique Davidson, Chief Executive of the Council.

“We knew that the 2021 - 2031 Long Term Plan would require us to face the facts, and undertake bold decision making to correct historic underinvestment.

“Through the consultation process, it was essential that we laid bare our challenges, to present an open and transparent view of our reality, allowing the community to partake in difficult trade off discussions and take ownership of the resulting plan.”

“Our goal was to deliver a plan that would see Central Hawke’s Bay thrive not just today, but well into the future, for the benefit of our children and grandchildren.

“We opted to create a visual representation of that, writing the document through the voice of ‘the next generation’ – four local young people aged between 11 and 15, who each discussed one of the four significant challenges up for consultation.”

The ‘Facing the Facts’ consultation period ran from 1 – 31 March this year with the resulting Long Term Plan by Council in June.

In support of the document, Council offered broad engagement across all sectors of the community, putting a large focus on face to face engagement and developing a purpose-built interactive consultation webpage used for the duration of the consultation.

Mr Horan said that given the strength of the top entries, this year the judges chose to award a highly commended prize in addition to a winner.

“In awarding the highly commended first, the judges recognised the bright vibrant design, use of symbols and infographics,” said Mr Horan.

“There were clearly identifiable themes and one of the best and most consistent presentations of options.

“Central Hawke’s Bay is a council that has singificantly upped its game in community engagment in the last few years and it shows in the design of the Consultation Document”.

Mayor of Central Hawke’s Bay, Alex Walker, said she was thrilled with the recognition.

“It was so important to us in building this document that we were able to clearly and deliberately tackle the big issues head on,” said Mayor Walker.

“Congratulations to the Council staff involved in developing this document, and thank you to our community who contributed to ‘Facing the Facts’ with us through the consultation process.”

The winning entry was Waipa District Council for its document ‘What’s Next, Waipa?’