Students get taste of picking 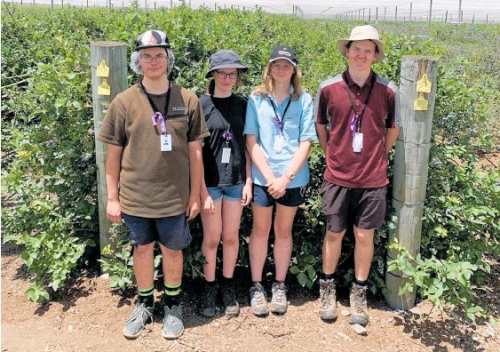 Every day more than 40 students from Central Hawke’s Bay are travelling to Hastings to pick blueberries for a summer job.

For many of them it’s their first job, and has been great experience, says CHB College teacher aide Angela Ross who organised it.

The initiative started when Ross wanted to help find summer work for her 15-year-old daughter.

After Gourmet Blueberries attended the CHB College careers expo, more students became interested and it soon grew to a busload of students.

Ross estimates she has put 55 student applications through to Gourmet Blueberry. It’s a casual job but every day there are more than 40 students taking the bus to Flaxmere for work.

Most the students are from the college, but there are others in Central Hawke’s Bay who heard about it through word of mouth.

“[The benefit] is huge, it makes [the students] realise what a dollar is worth,” she says.

It’s also benefited their organisation and communication skills as they have a messenger group to share information and have been communicating with other pickers from elsewhere in the world.

Since it is many of the students’ first job, they have gained experience opening bank accounts and getting IRD numbers. Some have challenged themselves with how much they can pick.

“They might’ve started with 5kg and some of them are now doing 25kg a day, there’s definitely that challenge for them.”

Gourmet Blueberries site human resources manager Shamina Lala says the students have made a difference during the season of uncertainty they were going into due to Covid- 19.

“It’s more hands in an uncertain time but it’s also an introduction to horticulture longer term because it’s not just a short fix for us.

“We’ve had to move away from our traditional ways of recruiting and look outside the box quite a bit which is where Central Hawke’s Bay has come in. It has expanded the radius from our workforce.”

Ross says one student in the Gateway programme plans to return to learn about other parts of the harvest throughout the year.