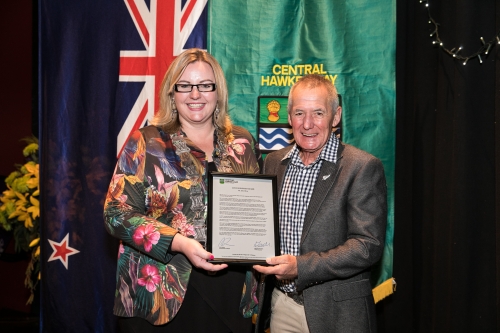 An audience of 200 people gathered at Central Hawke’s Bay’s Municipal Theatre, to recognise 10 individuals and two volunteer groups, who have dedicated countless hours to making Central Hawke’s Bay an even better place to live, work and thrive.

The prestigious 2021 Civic Honours Award went to John Oliver, who was recognised for his exemplary long-term service to the Ōtāne Volunteer Fire Brigade, Ōtāne Arts and Crafts Centre, Waipawa RSA, along with many other local projects and events.

The Civic Honours Award was first created in 1991, by Central Hawke’s Bay District Council, in partnership with the New Zealand 1990 Commission and Central Hawke’s Bay Women’s Institute, to recognise exceptional voluntary community service in the District.

It honours outstanding Central Hawke’s Bay citizens, who have gone above and beyond to serve their community, over an extended period of time.

Mayor Alex Walker said the Award went some way to showing extreme appreciation for the long hours, incredible passion and depth of service that Mr Oliver had shown.

“The winner of this particular Award is someone who has truly woven himself into the fabric of our society; he has given so much, and asked for nothing in return. Without people like John, the wheels that propel Central Hawke’s Bay forward, would not turn so smoothly.”

Last year, the annual ceremony presented a new format – introducing two new categories, including a Community Service Award and Organisation of the Year Award. This change recognised a need to highlight the many fantastic people and organisations working selflessly and tirelessly in the background.

“There are so many truly exceptional people and organisations, quietly working to make a difference behind the scenes, which meant it was very difficult for the Civic Awards Selection Panel to choose just a few recipients.

“For this reason we decided to increase the number of categories to include a broader range of Award winners – and we are so glad we did. In 2021 we have seen some incredible nominees that make us all incredibly proud to be from Central Hawke’s Bay.”

Recipients of the 2021 Outstanding Community Service Award, are:

Recipients of the 2021 Organisation of the Year Award are:

Central Hawke’s Bay Chief Executive Monique Davidson said the event highlights the unoticed mahi that happens behind the scenes everyday in our community, and bringing our silent achievers to the foregound.

“These are the people that have sacrificed their time and energy to make our District an incredible place to be. They have shared our vision for a bright future and played a huge part in bringing that vision to life,” she said.

“These Awards are a celebration of their extreme dedication and commitment to the community and I would like to congratulate each and every one of them – and wish them all the very best in keeping up the good work.”