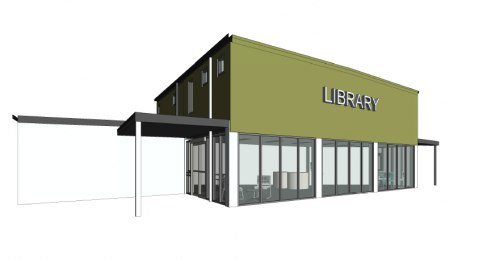 A new Regional Digital Hub will fast-track the reinstatement of Waipukurau Library services to the Central Hawke’s Bay community, while providing vital a plug-in point for key digital services.

Situated at the Bogle Brother’s Esplanade site, commonly known as the ‘Old Buck’s’ building – Central Hawke’s Bay’s Provincial Growth Funded Hub will be home to the Library and associated services, for at least five-years.

It will also deliver a range of programmes to bridge the digital divide, offering access for businesses, self-employed people and the community; with free Wi-Fi, co-working spaces and areas to present digital products and services.

Work, which began on the new site at the end of June, is the some of the most notable construction Council has completed since 2016.

Design and procurement groundwork was done in March 2021, and Council had to work through a rapid process to finalise plans before submission of building consent and landlord approval – all turned around in under 12-weeks to meet timeframes of the Provincial Growth Fund and the return of a service to Waipukurau.

Mayor Alex Walker said the project also had a very tight timeframe for delivery, with an anticipated 8 to 9 week work programme, and would not have been possible without external funding.

“With the extraordinary burden of core infrastructure investment that we are having to face up to in Central Hawke’s Bay, we are exceptionally lucky that funding, secured through the Provincial Growth Fund, has allowed us to piggy-back a new Library space in Waipukurau, which is on track to open in August.

“I want to make it very clear that without this external funding, we would not be able to re-open the Library space in Waipukurau. This means, although the new space will have a similar floor area to the old Library, it will accommodate a broader range of services to meet the needs of a greater number of people within the Central Hawke’s Bay community."

The Waipukurau Library was closed in 2020, despite Council and community expectations that the building had been strengthened as part of structural and renovation works completed in 2016.

Council’s Group Manager Customer and Community Partnerships Doug Tate said it was a great opportunity to refresh the front door to Central Hawke’s Bay, with the new Hub providing a unique transformation to the entrance of Waipukurau.

“This is a fantastic project that will give us the ability to fast-track the re-instatement of a Library service in Waipukurau. We are so aware of the important role of the Library, and we know its services have been missed.

“The new Hub will provide not only a short term solution for Library services, but become a digital gateway for businesses, employers and anyone wanting to learn and connect across the district”.

After initial delays, designs for the new building space were developed in conjunction with key local stakeholders.

Work being undertaken includes the installation of new meeting rooms, interior toilets and interior fit out. Materials from the old Library were being utilised, such as carpet, shelving and other fixtures. New joinery to the front of the building, signage and an accessible entranceway will also be added.
ENDS