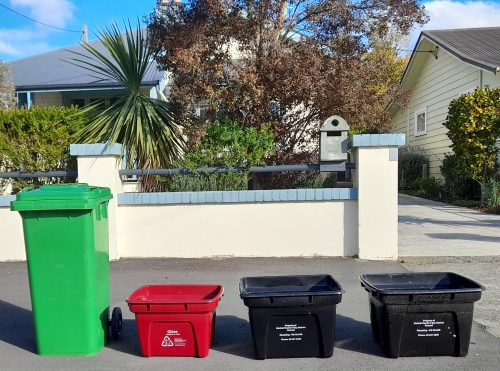 Central Hawke’s Bay District Council are moving forward with a plan to future proof solid waste services in the District, including the extension of kerbside recycling to wider rural communities of Otane, Takapau, Tikokino and Ongaonga, among a number of changes.

By year three of the Long Term Plan (2023/24), the use of a wheeled bin will also be rolled out to serviced areas, with current kerbside bag collections coming to an end.

Recycling collection for Otane, Takapau, Tikokino and Ongaonga will be supported with the addition of mobile recycling trailers for the wider rural community, while permanent drop off centres in those areas will close in order to consolidate waste management.

A review of the Waste Management and Minimisation Plan in 2019 and the wider Solid Waste Activity in 2020, focussed on changes to kerbside recycling, rubbish and transfer station provision.

The proposed changes were an area the community were specifically consulted on during the 2021 – 2031 Long Term Plan consultation process in March 2021.

The voice of the community came through loud and clear as a result of this process and changes to Council’s rubbish and recycling services will now come to fruition.

Central Hawke's Bay Mayor Alex Walker said recycling and the changes had benefits for every household in the district, and that all households should contribute to the cost in some way as a reflection of that: “We can’t keep everyone happy and change does unsettle things. Our issues with recycling contamination and wanting to increase participation and recycling volumes, means that we need to get smarter with the approach on how we use those services and potentially pay for them as well."

“The big bang here for the community is the extension of kerbside recycling outside main centres to Otane, Takapau, Tikokino and Ongaonga. We have a significant number of households who will now have access to kerbside recycling.”

Deputy Mayor and Chair of the Strategy and Wellbeing Committee Kelly Annand was excited about the changes to increase recycling to rural communities, recognising that it would need to be supported with wider communications and education.

“The changes are really exciting, and we are now in a position of creating rubbish and recycling services for the future that will make a real difference and help ensure we really are working towards a Waste Free CHB.”