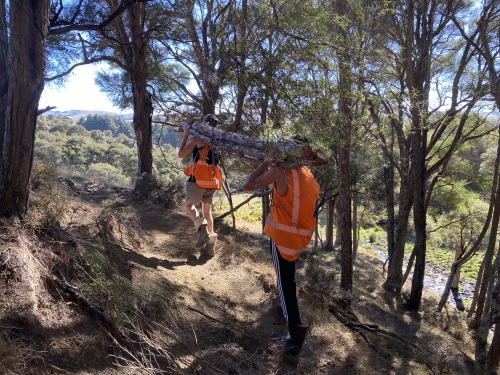 The harvesting of about 350 kānuka poles that will become an imposing 40-metre long palisade at a key Ngā Ara Tipuna site – Pukekaihau Pā – has begun.

Ngā Ara Tipuna, in Central Hawke’s Bay, celebrates the stories of the people of Tamatea, focused on six culturally significant sites in and around Waipukurau. The project, which marries the historic sites with hi-tech access to the stories of Tamatea, is on schedule to be completed mid-year. The free self-guided tour will bring the history of the rohe and its people to life.

With the major groundworks all but completed, the preparation of the final elements is now underway. At the same time as the work to source, cut and carry out the kānuka is carried out, the corten steel pou that will stand at the sites are being fashioned, and the last of the voices of the people recorded for the stories.

The kānuka harvest and palisade construction is being led by Conrad Nepe Apatu, of Ngāti Mārau, a Central Hawke’s Bay Resource Teacher of Māori and carving tutor. On the first trip he was ably assisted by two Central Hawke’s Bay College students, Jono Clarke and Taranaki (Boboy) Nepe Apatu-Borell, and Chris Hay, creative director of cultural experience design company Locales, which is co-ordinating the project.

Conrad said while last week’s trip was mainly reconnaissance, they did bring out 35 of the required 350 poles. On future trips, more students from the college carving and Te Reo classes will be brought in to help.

The poles will be shaped before being fixed to the fence using bolts rather than traditional methods – for health and safety reasons. Once they are up the students will learn flax binding, which will be used to cover the bolts.

He said having youth involved in the construction was incredibly important. “It’s about linking our young ones back to the ways of our tīpuna who worked collaboratively with the environment and whose footprints can still clearly be seen on our land 400 years later. It’s about asking these kids what are they going to do that will resonate 400 years from now.”

Chris said the cutting and carrying out of the kānuka, donated by teacher and farmer Di Murphy, was incredibly satisfying but also one of the physically toughest days on the job. “The karakia by Conrad before we started reminded us of the importance of the work we were about to do, and of the whole project. And then the hard mahi started. We need to harvest about 350 kānuka poles, all about two metres long with a diameter of about 50 millimetres. On that trip, which was essentially a planning trip, we carried out about 35 poles; so we have some work ahead of us.”

The six Ngā Ara Tipuna sites are Pukekaihau Pā, Te Waipukurau Pā, Moana-i-Rokia Pā, Horehore Pā, Ruatangaroa Pā and Kaitoroa Pā. At each of the sites, storyboards will explain elements of history and significance. On-line access to stories and videos will be via smartphone, using QR codes.

Ngā Ara Tipuna is a collaborative project being developed by hapū of Taiwhenua o Tamatea in conjunction with Central Hawke’s Bay District Council. The cultural heritage project combines traditional design elements with contemporary materials and processes, digital storytelling and displays at significant sites. It will engage locals and visitors through the sharing of stories of the people of Tamatea and their relationship with the land, and enhance shared connections: Learnings from the past; appreciation for the present; hope for the future.