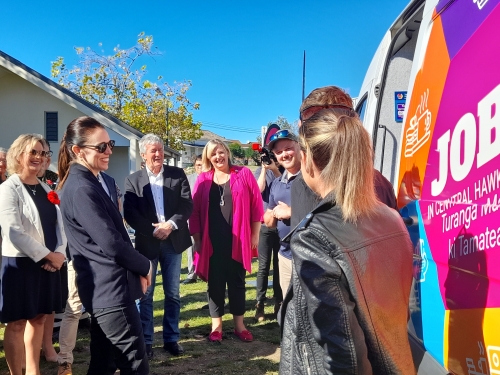 Prime Minister Jacinda Ardern commended Central Hawke’s Bay District Council today for the critical role it had in facilitating employment opportunities through the Mayor’s Taskforce for Jobs, and demonstrating a strong ‘place-based’ approach as part of its Covid response and recovery.

Prime Minister Jacinda Ardern said, “I want to commend the Central Hawke’s Bay District Council for its proactive leadership through what’s been a very challenging time.”

The Prime Minister paid an official visit to Central Hawke’s Bay this morning to see and hear more about the council’s community initiatives made possible through the government’s Covid recovery streams and Mayor’s Taskforce for Jobs.

Mayor Alex Walker and Chief Executive Monique Davidson hosted the Prime Minister on her visit to the district where she met the local Mayor’s Taskforce for Jobs team, visited their mobile employment hub and met several local people who they had helped into employment.  This partnership project with the national Mayor’s Taskforce for Jobs network, and the Ministry of Social Development has connected funding with the power of local communities.

Prime Minister Jacinda Ardern said, “I’ve met people today whose lives have truly been changed by employment opportunities made possible by the Mayor’s Taskforce for Jobs programme.  This is a fantastic example of what can be achieved through strong place-based local government leadership.”

As part of the Council’s Covid recovery programme they also secured just over $3.5 million from the government’s rapid redeployment fund to support shovel ready projects across the district. This partnership investment created a further 110 employment opportunities for people who would have otherwise been displaced by Covid.

Mayor of Central Hawke’s bay, Alex Walker said, “It was wonderful to welcome the Prime Minister into our community today; to meet our people, and demonstrate how we’re using government funding and partnerships to support the wellbeing and livelihood of our communities.

“Community is everything – it’s our sense of place and identity. Despite the obvious challenge we face with wastewater infrastructure, that is forcing us to pour every spare dollar into it, we have shown that community-based partnerships and innovative leadership can deliver great outcomes for a small rural area. I see a bright future for local government if partnerships like this can be embraced across the country.”

The Prime Minister completed her visit at the Waipawa Municipal Theatre where she greeted Central Hawke’s Bay District Council staff and councillors and thanked them for their continued and sustained efforts in delivering social and economic outcomes for the community of Central Hawke’s Bay.