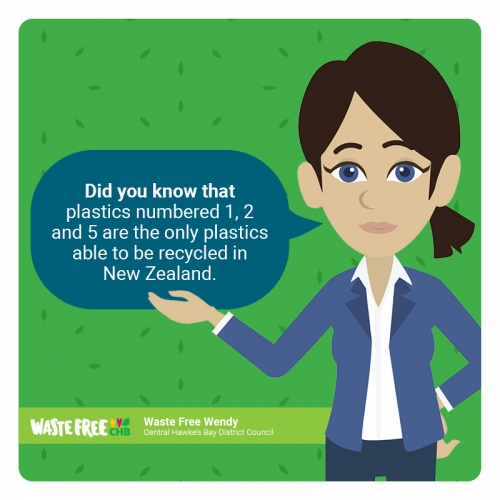 Central Hawke’s Bay’s residents are asked to take note of significant changes to plastic disposal scheduled to commence 1 November 2020, in a move to align the district’s recycling practices with strict national guidelines.

Kerbside recycling crates which contain plastics numbered 3, 4, 6 and 7 will be treated as contaminated and rejected following the 1 November changeover.

The decision comes after changes to the process of plastics disposal were introduced throughout New Zealand earlier in 2020, to meet Basel Convention requirements – an international agreement involving more than 180 countries, which was amended in 2019 to better regulate the global trade in plastic waste, largely for the protection of developing countries where our plastic ‘recycling’ often ends up.

Prior to these amendments being made, Central Hawke’s Bay – alongside many other parts of New Zealand, were able to ‘recycle’ all of plastics numbered 1 – 7, by mixing certain contaminate plastics (numbered 3, 4, 6 or 7). This meant that although these plastics left New Zealand’s shores, receiving countries dealt with them by sorting contaminate plastics from recyclable plastics and disposing of them as waste. The amendments to the Basel Convention says that from January 2021, New Zealand recyclers will no longer be able to do this. Instead, only recyclable plastics (numbered 1, 2 and 5) will be accepted for shipping overseas.

This has resulted in fewer traditional markets looking to purchase recycling and as a result of this, national recyclers are having to find new markets, or other ways of repurposing our recyclable material.

“It is no longer viable for our contractor to continue this service which means that from 1 November we will only be collecting plastics 1, 2 and 5 as part of our kerbside recycling collection service.

“By recycling plastics 1, 2 and 5 we do cover the bulk of our plastic disposal, including milk bottles, soft drink bottles and margarine containers.

“I encourage everyone in Central Hawke’s Bay to reduce their consumption of plastics 3, 4, 6 and 7, as much as possible – so they don’t end up in landfill.”

The Council has included tips on how local recyclers can make ‘simple swaps’ to reduce their waste on the Waste Free CHB online hub, at www.chbdc.govt.nz/waste-free-chb.