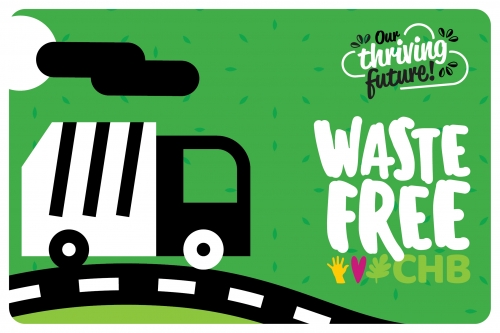 Through the responses received, Central Hawke’s Bay District Council understand how important the correct management and reduction of waste is to the Central Hawke’s Bay community and have set a series of ambitious goals, designed to meet the long-term aspirational target of a Waste Free CHB.

To reach these targets, Council and Community need to work together. But we can do it!

There’s a lot going on in the world of solid waste and in particular, recycling. There are fewer traditional markets looking to purchase our recycling and as a result of this, our recyclers are having to find new markets, or other ways of repurposing our recyclable material.

One of the most significant impacts however, happened earlier this year, when changes to the process of plastics disposal were introduced throughout New Zealand, to meet Basel Convention requirements – an international agreement involving more than 180 countries, which was amended in 2019 to better regulate the global trade in plastic waste, largely for the protection of developing countries where our plastic ‘recycling’ often ends up.

Prior to these amendments being made, Central Hawke’s Bay – alongside many other parts of New Zealand, were able to ‘recycle’ all of our plastics numbered 1 – 7, by mixing certain contaminate plastics (numbered 3, 4, 6 or 7). This meant that although these plastics left New Zealand’s shores, receiving countries dealt with them by sorting contaminate plastics from recyclable plastics and disposing of them as waste. The amendments to the Basel Convention says that from January 2021, we will no longer be able to do this. Instead, only recyclable plastics (numbered 1, 2 and 5) will be accepted for shipping overseas.

At this stage, Central Hawke’s Bay District Council will still collect plastics numbered 3, 4, 6 and 7 however these are separated at a Materials Recycling Facility and sent to landfill. We will however in the future need to consider if we stop the collection of these. I encourage everyone in Central Hawke’s Bay to reduce their consumption of these plastics, as much as possible – so they don’t end up in landfill.

Although Council is doing as much as we can to work with both our contractors and community, there are a series of obstacles that we need the community to understand about their recycling:

Council have developed a Waste Free CHB online hub which you can find at www.chdbc.govt.nz/waste-free-chb. Here, you will find some tips on how to make purchasing choices so that you can avoid buying plastics that can’t be recycled, as well as further information and ideas on how you can reduce your waste, what exactly can be recycled, and what happens to your recycling once you drop it off either at the kerb, or one of our Recycling Drop-off Centres. We’ll continue to build and add to this and I invite you to provide your feedback and ideas.