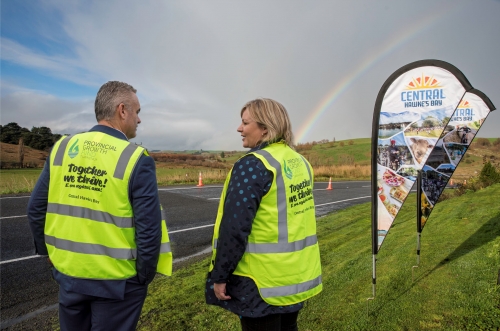 The Central Hawke’s Bay District Council yesterday showcased some of its progress to date in rebuilding its thriving pre-COVID-19 and Drought economy, as part of a combined launch event for three new projects which, together, stand to significantly boost local business activity and jobs for the District.

The three projects – a Provincial Growth Funded initiative to improve transport and infrastructure for the communities along the Porangahau-Wimbledon Road; a ‘Jobs in Central Hawke’s Bay’ initiative, which forms part of a Mayors Taskforce for Jobs pilot programme to create unique employment outcomes by acting as a connector between Employees, Employers and Government Agencies, and; a work redeployment initiative, forged out of more recent PGF funding for vegetation management –  represent a significant step forward in the longer term economic recovery of Central Hawke’s Bay and a pipeline of local employment opportunities.

Nearly 1% of the District’s population have sought employment support since March, and while business confidence since reopening from the COVID-19 lockdown has been cautiously optimistic, preparing for the long-term economic and social impacts of both events is a major focus of the Central Hawke’s Bay District Council.

“We’ve known from the outset we needed a multi-faceted and long-term approach to economic recovery for our District, and yesterday's event has allowed us to show the people of Central Hawke’s Bay we are standing by our commitment,” says Chief Executive of the District Council, Monique Davidson.

“Stimulating economic activity through works programmes and targeted support with regards to employment were identified early on as effective ways to support our communities through this period, so I am really thrilled to see some of these coming to fruition,” she says.

The project to upgrade part of a key Central Hawke’s Bay thoroughfare, the Porangahau-Wimbledon Road Upgrade project was first initiated by the District Council last year following the announcement of dedicated funding through the Provincial Growth Fund.

After extensive planning over the last 12 months, the project officially launched this week with work commencing to build new retaining walls in Wanstead.

Parliamentary Under Secretary for Regional Economic Development, Fletcher Tabuteau, was in attendance on Thursday’s event, returning to launch the project after announcing it last year.

As part of this long-term programme of work, the Council will procure multiple local contractors for a number of separate projects, comprising various types of work.

“Though already in motion prior to the twin blows of COVID-19 and the prolonged drought, this $20.1m project will prove invaluable in supporting local businesses and therefore employment within our district,” says Ms Davidson.

Currently, the construction aspects of the programme employs 37 people with another 30 expected to be bought on before the end of the project in 2022.

The ‘Jobs in Central Hawke’s Bay’ project, part of a $100,000 pilot programme initiated as part of a joint partnership between Mayors Taskforce for Jobs (MTFJ) and the Ministry of Social Development, will foster a targeted approach to creating new employment, for youth in particular, through innovative new programmes.

Further to this, it has supported the establishment of a series of temporary employment hubs, in Waipukurau, Waipawa, Porangahau and Takapau, as well as a mobile employment hub.

The Employment Hubs primary focus are to be a key conduit for the community to connect with the Ministry of Social Development Services in particular, where employees and employers can visit the Hub to seek further information, or register to obtain employment, or an employee.

Manned by a combination of volunteers, Te Taiwhenua o Tamatea, community organisations, Mayors Taskforce for Jobs support staff, and supported by Central Hawke’s Bay District Council and the Ministry of Social Development, placing community at the centre of the response is the focus.  Those that visit the hub, leave with an employment pack, as well as referrals and connections to other support services if needed.

“In effect, this initiative stands to break down barriers and help connect our small businesses and our young people – two very important groups within in our communities, alongside all others in our community who are in need of jobs support,” says Mayor of Central Hawke’s Bay, Alex Walker.

“It was great to see our new employment pop-up vehicles in action.”

The work redeployment programme, which is focussing on the rapid response employment of workers, also aims to utilise a PGF funded project to support local employment.

“This is about redeploying people into work, therefore safeguarding their employment status in a challenging economic climate,” says Ms Davidson.

“We have already seen nine employees commence work on this project, and are set to see another 24 redeployed by the end of this month.”

Ms Davidson says there is a huge appetite for meaningful employment opportunity in Central Hawke’s Bay, and the Council is steadfastly committed to supporting those who have lost their jobs as a result of recent events, back into the workforce.

“Though we are seeing some excellent initiatives underway already, it’s important to remember this is just the beginning of the Council’s strategy of navigating economic recovery for the District.”

Ms Walker says yesterday’s event is testament to the fact Council has started as it means to go on.

“The launch of these three initiatives marks a significant milestone in our journey back to that thriving Central Hawke’s Bay District we are all proud to be a part of.

“There is no overnight resolution to the impacts of COVID-19 and the prolonged drought, but the people of Central Hawke’s Bay can certainly rest assured we are on the right path.”