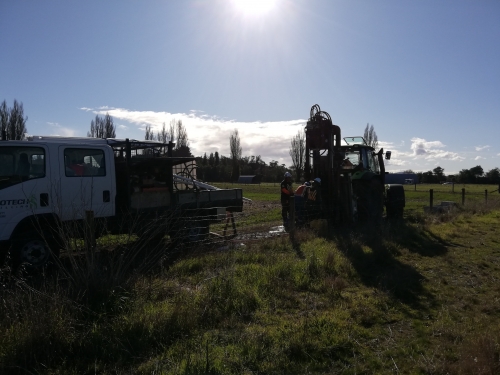 Work on a new wastewater pipeline between Otane and Waipawa has officially commenced this week.

Stage one of the project, valued at $1.15m, will see a 3.5km section of new wastewater pipeline installed between the two towns, the first third of the pipeline which will eventually transfer Otane’s wastewater to Waipawa for treatment and discharge.

Fulton Hogan have been contracted to undertake this work which is expected to be completed by October 2020.

The change to the use of project funding was adopted by Council late last year, as an alternative to the planned upgrade works to the existing Otane Wastewater Treatment Plant, the decision and outcome is consistent with the values of Project THRIVE and in particular being environmentally sustainable, constructing durable infrastructure, and applying generational thinking to decisions.

“The Otane to Waipawa Wastewater Pipeline project will achieve better long term outcomes  improving the treatment of Otane’s wastewater, by piping to a collective treatment site in Waipawa, rather than an isolated plant in Otane,” says Ms Davidson.

“The result of this project will be that the towns of Waipawa and Otane are set up for smart growth to benefit incoming generations. Ensuring that our infrastructure is durable, while also being environmentally responsible, is a priority.”

Commencement of the project comes six months after the completion of Otane’s new Alternate Drinking Water Supply, which was commissioned in December 2019 and connects the Waipawa and Otane drinking water networks via 5.2km of new pipeline. “By procuring resources to install sections of wastewater pipe along the same route as the Otane Alternate Drinking Water Supply, Council has been afforded a significant saving of approximately $200,000 in site establishment, mobilisation and procurement costs,” says Ms Davidson.

“The Walker Road site forms a key component of our options analysis as a potential land discharge site. The community will be engaged with on this over the coming months, to ensure we deliver on community, cultural and environmental aspirations,” says Ms Davidson.

The Council’s 2021-2031 Long Term Plan will consider wastewater projects including the next stages of the Otane to Waipawa Wastewater Pipeline, and we will commence pre engagement with the community later this year.