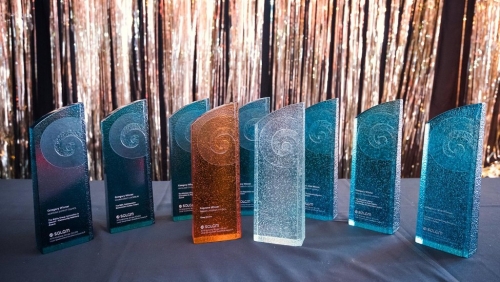 This afternoon saw a double win for Central Hawke’s Bay District Council, at the announcement of this year’s Excellence Awards by the New Zealand Society of Local Government Managers (SOLGM).

The Council took out the Capability Group Award for Innovation in Organisation and People Development, one of the categories of the prestigious 2020 McGredy Winder SOLGM Local Government Excellence Awards® for Together We Thrive! E Ora Ngātahi Ana, multi-year organisational transformation and development programme.

Chief Executive of the District Council, Monique Davidson, is thrilled with the win, stating that this is an award to be enjoyed by all of the Council’s staff, Elected Members and the Central Hawke’s Bay community.

“Central Hawke’s Bay District Council has experienced unprecedented change over the last three years, following the 2016 election which resulted in a significant change in leadership, and in the direction of Central Hawke’s Bay. This was reflective of the voice of the community who were seeking innovative organisation leadership and a new approach to delivering value.”

“This award recognises the power of thrive, but most importantly the value of people centred leadership which has allowed us to transform our organisation, and in turn how we interact and serve our community. Each of our employees at Council play a critical role in achieving our vision of a thriving Central Hawke’s Bay District, and right now I could not be prouder to lead the team” says Ms Davidson.

“To have achieved the level of improvement in staff engagement in 12 months is a testament to the leadership being aligned, along with a clear expectation from the governance wing, and a clear measurable transformation plan.

“The judges look forward to hearing how this initiative progresses.”

“Congratulations to all of the staff at Central Hawke’s Bay District Council, who work extremely hard to bring Project Thrive alive for benefit of all of our District. It’s fantastic to see them recognised nationally for these efforts” says Alex Walker, Mayor of Central Hawke’s Bay.

The Exchange, sponsored by AskYourTeam, provides a hosted visit to Queensland and a reciprocal visit to New Zealand. The aim of the Exchange is to provide a leadership and development experience for local government professionals.

SOLGM’s Workforce Leadership Manager, Jenny Spencer said that Doug impressed the judges with his desire to see how community engagement is undertaken in rural areas of Australia, and how this can be translated to rural New Zealand.

“Although early in his local government career, Doug demonstrated his ability to lead teams to deliver value for their communities, as well as the wider sector.”

“I’m delighted to be granted the opportunity to travel to Queensland, to gain insight and knowledge of the way other rural Council’s operate and engage with their communities. I look forward to bringing fresh ideas back to my own community of Central Hawke’s Bay” says Mr Tate.

SOLGM is the national membership organisation for local government professionals. In light of COVID-19 Alert Level restrictions, the announcement of this year’s awards were held via pre-recorded video streamed to the SOLGM website and Facebook page.