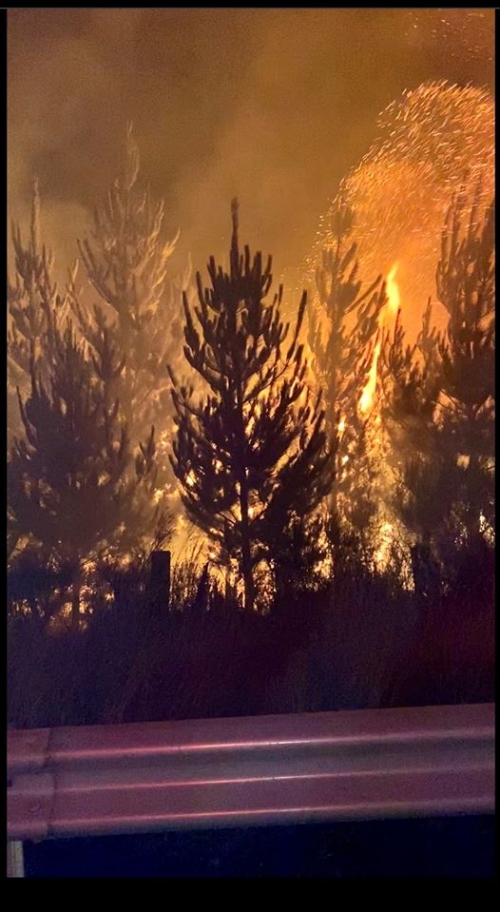 Fire and Emergency New Zealand is continuing to fight the fire at Tikokino in Hawke's Bay, with 30 firefighters on the ground plus five helicopter crews working on containing the fire’s perimeter.

“The current weather conditions are more favourable than what we’ve been dealing with over the last couple of days,” he said.

“The drop in temperature and wind speed has made conditions a little less difficult for our crews.

“We are slowly getting the fire under control.”

Crews are likely to monitor the fire overnight.

The one home evacuated this morning remains protected and no further properties are at risk.

Mr Cooper said the team was very grateful to the Salvation Army, which had its trailer on site to prepare food for the firefighting personnel.

Fire and Emergency New Zealand continues to work on containing a fire just north of Tikokino.

Crews have been working on the fire since about 5pm on Monday. The fire flared up again in the early hours of this morning because of strong winds.

Area Commander Ken Cooper says people should stay away from the area.

The fire has burnt more than 10 hectares of farm and forestry land.

There are currently 40 firefighters, 10 appliances and five helicopters working on the fire and heavy machinery building containment lines.

The cause of the fire is not known at this stage and will only be determined after fire investigators have carried out an investigation.
One property has had to be evacuated and two are on stand-by to evacuate. No other houses are at risk.

Fire and Emergency New Zealand has closed State Highway 50 just north of Tikokino as they fight a 20-hectare fire burning in the area.

Area Commander Ken Cooper said the road would be closed until at least midday.

“We’ve had to close the road for people’s safety, and to allow us to get helicopters into the area to fight the blaze.

“Anyone traveling in the area will need to take an alternate route until we can safely re-open the road.”

Mr Cooper said the fire was on land that was a mixture of forestry and grass.

One property has been evacuated and three are on stand-by to evacuate.