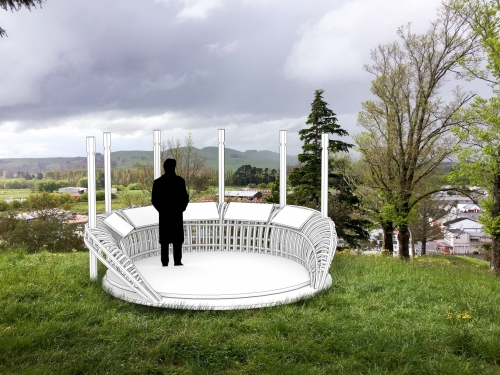 In a rousing and emotional haka pōwhiri on the historic pā site Pukekaihau, local Tamatea Taiwhenua and hapū formally welcomed up to $2.8 million of Provincial Growth Fund (PGF) investment for Ngā Ara Tipuna, a visitor experience project that will bring historic pā sites back to life, following an announcement in Waipukurau today.

Under Secretary of Regional Economic Development Fletcher Tabuteau delivered the welcomed announcement of the $2.8 million of PGF investment on Tuesday afternoon, accompanied by other dignitaries and visitors.

Ngā Ara Tipuna, interpreted as our ancestral pathways and connections, is a Pā site interpretation project that will showcase the network of six historic pā sites surrounding Waipukurau.  This significant cultural heritage project includes the creation of carvings, digital storytelling and displays to engage visitors and locals through sharing the stories of the people of Tamatea and their relationship with the land.  It is an important cultural heritage initiative and positive catalyst for tourism growth - generating employment, boosting tourism and the local economy, including the Māori economy.

Te Taiwhenua o Tamatea in partnership with Central Hawke’s Bay District Council (CHBDC) and Tamatea Hapū will receive up to $2,798,000 of PGF investment for the project.  A further $1 million dollars of funds will be raised locally towards the $3.8 million dollar project.  The injection of funds, follows initial investment in the project as part of the $35.5 million announcement of PGF investment for Central Hawke’s Bay made in June 2019.

“This project is an important step to acknowledging the long established historical connection of Māori to Waipukurau and the Tamatea district.  Its significance to Māori was summed this week by one of our kuia who said, ‘this is the most exciting thing that has happened in my lifetime’.”

Work on the development of the digital story telling will commence in February 2020, with construction occurring in two phases.  Phase 1 construction is planned to commence in mid-2020, and will focus on the development of the largest pā site, Pukekaihau.  Phase two will begin in early 2021 identifying the remaining five pā sites, Te Waipukurau, Kaimanawa, Kaitoroa, Ruatangaroa, and Moana-i-rokia. Planning for Phase 3 of the project is already underway, that will include wider district pā sites and business opportunities that complement the project.

While reclaiming the stories of the people of Tamatea, the project aims to provide a cultural narrative for the District that encourages collective community identity, while positively influencing the local economy and links to other projects in neighbouring rohe, supporting tourism and Māori economic development.

“The importance of this project to the people of Tamatea is more than significant – it is simply quite overwhelming”, said Alex Walker, Mayor of Central Hawke’s Bay.

“While we may stand upon this unassuming hill top in Tamatea, it is the reawakening of the stories of these unassuming places such as Pukekaihau and other taonga, that will once again etch the important place of Mana Whenua on our landscape and enrich our people in so many ways”.

“Through Project Thrive we heard from our community the importance of this project and providing for a Central Hawke’s Bay of the future.  We are proud to have been working hand in hand with Te Taiwhenua o Tamatea and hapū repesentatives to develop Ngā Ara Tipuna, to see Tamatea reawakened”.