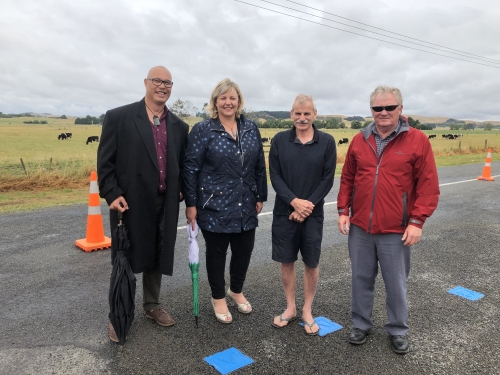 Mayor of Central Hawke’s Bay, Alex Walker, officiated the event, which saw elected members, project stakeholders and local residents came together on an uncharacteristically wet and windy day to celebrate. “We know that accessibility to quality drinking water is of the utmost importance to our community” said Mayor Walker. “The completion of this flagship water project is a game changer for the people of Otane, who know that they are leading population and housing growth in the district and today can feel confident in a consistent water supply to meet not only their existing demand, but that of the future.”

The new supply promises to significantly increase the resilience of Otane’s water supply which has seen several incidences of shortfall prior to the project’s completion, resulting in localised water restrictions being placed early this summer. Contracted to Fulton Hogan Ltd, the $2.6 million project has seen 5.2km of new pipeline laid from State Highway 2, connecting into the existing Waipawa water supply and then into the Otane network via Racecourse and White Road.

“Otane, alongside the whole Central Hawke’s Bay, is thriving. It brings me great pride to support the vision for our District by investing in enduring infrastructure that we can be proud of, and that can support our children and grandchildren in the future” says Mayor Walker.

Central Hawke’s Bay is experiencing a surge of positive growth and heightened activity as a result of a strong local and regional economy, new residents, businesses and visitors to the District. With some of the strongest property growth figures in New Zealand, November 2019 marks a new record median house price for the District, now sitting at $404,000, up $50,000 on this time last year. As many as 1,025 new households are expected in the District in the next 30 years.

With the development of a new subdivision on White Road taking place, Otane is pivotal to this growth and the Council has worked collaboratively with the developer to achieve not only the installation of services required for its completion, but to future proof Otane. “Working in collaboration has had real benefits, not just to the developer but the wider community – achieving efficiencies in the delivery of Council projects and a long-term ‘dig-once’ approach” says 3 Waters Programme Manager, Darren de Klerk.

“The Otane Alternate Water Supply was a key infrastructure project as part of #thebigwaterstory capital works programme and we’re proud to be able to deliver this to the people of Otane” says Monique Davidson, Chief Executive of Central Hawke’s Bay District Council. “We do ask people to remain diligent in their water conservation efforts however and thank them for their work in this so far.”