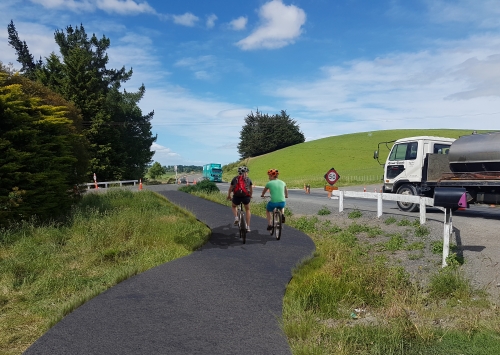 Walking and cycling in Central Hawke’s Bay will soon be easier, with construction work on a shared pathway for cyclists and walkers between Waipawa and Waipukurau expected to start mid-2020.

Waka Kotahi NZ Transport Agency has confirmed that the project is heading into its final design stage, with all the land for the pathway now purchased in preparation.

Approximately 4.2 kilometres of new path will be built on the eastern side of Taipairu Road and State Highway 2, supporting other ongoing safety improvements the Transport Agency is delivering between Pakipaki and Waipukurau.

Transport Agency Senior Project Manager Rob Partridge says, “Connection between the two townships is important and this opens up a safe separated connection for cyclists, mobility scooters and pedestrians.

“Partnering with local communities to achieve common goals produces excellent outcomes for everyone. While we are strongly focused on safety, we also have a responsibility to encourage people to think about using different ways of getting around without driving a car. A shared path between the two main centres of Central Hawke’s Bay is a great way to do this,” Mr Partridge says.

“We are thrilled to see progress on these plans to better connect Waipukurau and Waipawa. To provide safe access between the two towns for youth, in particular, but also for mobility scooters, cyclists, runners and walkers, will be an incredible addition to our drive to be as strong and connected as we can be as a community.”

Demand for a separated pathway between the two towns has been long and sustained across the Central Hawke’s Bay community, with former Mayors, Councillors and community groups lobbying for it for many years.

“This connection between the towns has been seen as a logical and necessary step for strengthening our infrastructure, community and public services for the future,” Mayor Walker says.

“The completion of this pathway by NZTA supports us in that.”