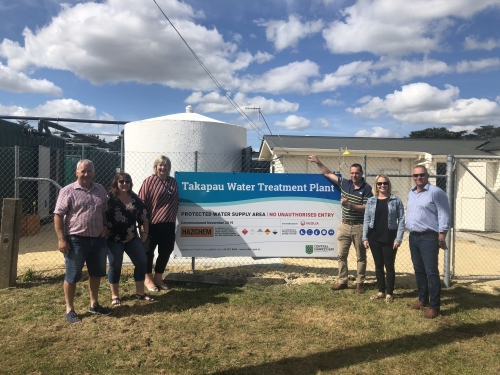 The $800k project, of which construction commenced in July 2019, involved designing a new treatment system to deal with the known issues of manganese while ensuring consistency and compliance with the drinking water standards and allowing for the ability to meet community water demands.

Alex Walker, Mayor of Central Hawke’s Bay, officiated the opening and spoke of the significance of water in the Takapau community. “When consulting with Central Hawke’s Bay residents during the initial stages of Project Thrive, it was absolutely clear that drinking water upgrades in this village were of utmost importance. It brings me such joy to see the true and tangible impact the upgraded Takapau Water Treatment Plant will have on the lives of Takapau’s people” said Mayor Walker. “The quality of the work we have done here is leading the way in New Zealand.”

The design of the plant was a collaborative effort between Council, contract partners Stantec and Veolia, and the community. Community involvement has been an important part of the process, with a number of workshops held in Takapau. “Having the input of the people in Takapau has been core to the design of this project”, 3 Waters Programme Manager Darren de Klerk noted. “Their input and participation in our community workshops has meant the final design is able to appropriately address their needs and concerns.”

Long-time local resident Lyla Koppen was in attendance at the opening which invited the community to explore the plant and gain an understanding of how it operates. “I never thought we’d get clean water in my lifetime” said Ms Koppen. “It’s incredible to be able to turn on the tap and voila! Clean water.”

The #bigwaterstory is one of the key initiatives in the 2018-2028 Long Term Plan and will see approximately $32 million in capital investment over the next 10 years in 3 Waters infrastructure in Central Hawke's Bay. “This investment will ensure we have resilient, durable infrastructure for future generations” Chief Executive of Central Hawke’s Bay District Council Monique Davidson said. “It caters for all facets of growth in the district for the benefit of all.”

For details on this project and other water infrastructure projects, visit https://www.chbdc.govt.nz/our-district/projects/bigwaterstory/