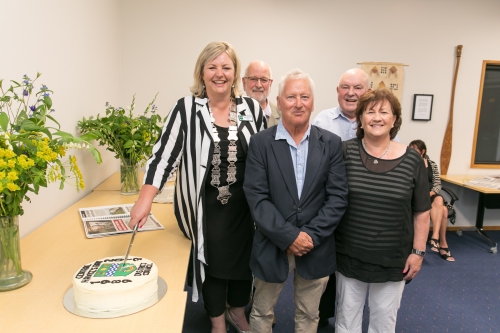 Central Hawke’s Bay District Council’s inaugural council meeting was held on 1 November 1989 after the merger of Waipukurau and Waipawa Councils.  The meeting was chaired by Mayor Hugh Hamilton who held the mayoralty from 1989 to 1996.  To date the Council has had six mayors, including current Mayor Alex Walker, and 46 councillors representing the people of Central Hawke’s Bay.

CHBDC’s elected representatives had a chance to exchange stories, look through the council’s archives from the last 30 years and review the progress, major achievements and growth of the district since the council was established.

Mayor Alex Walker said: “Thirty years ago the amalgamation of our councils was a hugely contentious issue. But through the passionate, committed and proud elected members and officers of Central Hawke’s Bay; the issues of waste, water, roads and infrastructure continue to be as important today as they were 30 years ago.”

“The future for Central Hawke’s Bay is bright. As a council we will continue to future-proof our core infrastructure and services, ensuring our decisions are for the benefit of our grandchildren. And as local government across New Zealand now turns their focus to the wellbeing of our communities and how our services support people and environment, Central Hawke’s Bay will be leading the way.”