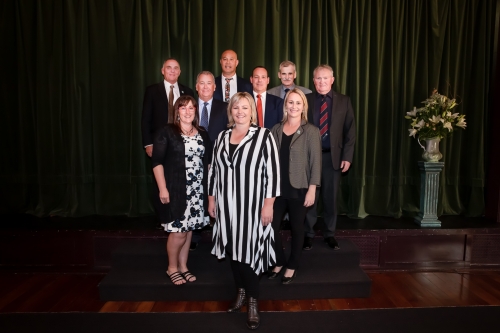 Central Hawke’s Bay’s elected members and returning Mayor, Alex Walker, were sworn in as the district’s representatives for the next triennium at a vibrant and moving powhiri and ceremony last night at the Waipawa Municipal Theatre.

Mayor Alex Walker set the scene for the next three years of delivery at the inaugural council meeting and appointed her Deputy Mayor, Councillor Kelly Annand, who enters her third term as standing councillor for Central Hawke’s Bay.

In a moving speech, Alex Walker talked about the exciting future for Central Hawke’s Bay and the steps that council will need to take over the coming years to continue to build a thriving a prosperous district.

“As we enter a new triennium, it is imperative that we continue the momentum on building excellence for our community, and begin to sharpen our focus on the mechanisms that we have for true transformation for the future. We want to be proud, prosperous and strong communities, well connected with each other and with those outside of Central Hawke’s Bay, and we want to cherish our beautiful environment for future generations.

Deputy Mayor and Councillor Kelly Annand said: “I’m honoured to be appointed as Deputy Mayor for Central Hawke’s Bay and am looking forward to continuing to serve my district to the best of my ability over the coming term, and to support the Mayor in her duties.”

Students from Te Aute college and representatives from Te Taiwhenua o Tamatea welcomed the nine elected members, who were supported by close family and friends.

The first official council meeting will take place at 9am on Thursday 14 November at the Waipawa Council Chambers.