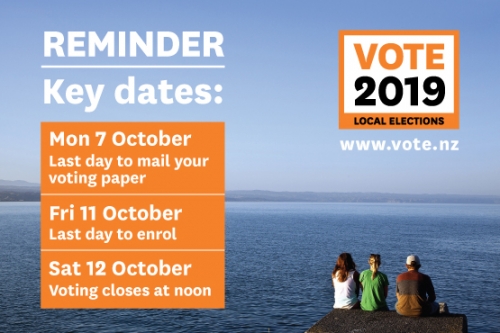 Central Hawke’s Bay District Council’s (CHBDC) Chief Executive, Monique Davidson, is urging people to get their voting documents in as return rates to date indicate the lowest voter turnout in in a decade.

CHBDC Chief Executive, Monique Davidson said “We are monitoring incoming votes, and historically would have recorded a surge in voter participation by now. This record slow response rate is concerning as we need our communities to fully engage and have a say on the future of their council and district and its growth over the coming three years.

“With less than 10 days to go I encourage everyone to have a say and return their voting forms. If you haven’t received your voting pack yet, you will need to cast a special vote, which is very easy to do. Just get in touch with us here at the council to find out more.”

All residents should have received their voting packs in the mail by now if they enrolled to vote, and have until Monday 7 October to return their votes through the post. From Tuesday, residents will need to drop their voting forms directly into one of the ballot boxes at the Waipukurau Library, or the Council Offices in Waipawa, Hastings or Napier to ensure they arrive on time.

Any residents who have not received a voting pack are required to cast a Special Vote.  Casting a special vote is easy and can be done at the Central Hawke’s Bay District Council offices in Waipawa during opening hours of 8am-4:30 pm.

For more information about voting in Central Hawke’s Bay visit www.chbdc.govt.nz/elections2019 or phone 06 857 8060.