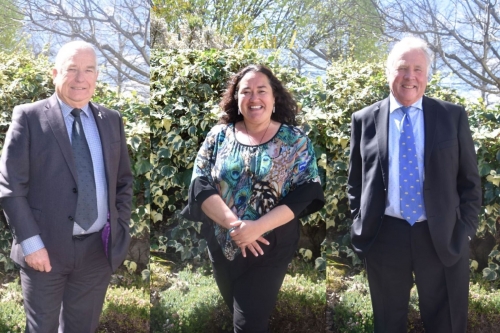 Heartfelt farewells from three of Central Hawke’s Bay District Council’s prominent retiring councillors, including the Deputy Mayor, were heard at last week’s final meeting of full council for the triennium.

Deputy Mayor Councillor Ian Sharp, and Councillors David Tennent and Shelley Burne-field took to the floor for the last time to recall memorable moments, including the highs and lows, from their years of serving the Central Hawke’s Bay community.

Deputy Mayor, Councillor Ian Sharp was elected in 2010 to represent Central Hawke’s Bay’s Ruataniwha Ward.  Deputy Mayor, Councillor Sharp said he was proud to be a part of teams that had delivered plenty and that he leaves with no regrets.  “Team work is essential in delivering great things for the community. I'm confident that the plans put in place by this table will see Central Hawke’s Bay is well served now and in the future, from roading through to the work on our three waters.  I wouldn't have been a part of this without the support of my wife and I thank everyone else who has shown support along the way.”

Councillor David Tennent was elected in 2001 to represent the Aramoana / Ruahine Ward and served through until 2019, with a six year break in between. Councillor Tennent recalled a lot of positive change across the council and the district, particularly over the last few years. “The last three years have been the most productive years for a long time,” he said.  “There are challenges ahead, but stick to it.  I want to thank my family for the interest and support they have shown me over the last three years, especially my wife Sal. I wish you all the best for the district.”

Councillor Shelley Burne-Field was elected in 2016 to represent the Aramoana / Ruahine Ward. Councillor Burne-Field spoke of the successes over the last term which she was particularly proud of having ‘planted the seeds’ for, including progress on community planning, lobbying central government for funding, safer communities and the mayor’s taskforce for jobs. She thanked the community and staff for their support and excellent work. “Thanks to the community and citizens who valued my experience and passion. We’ve come a long way. We see our community thriving, and there are a lot of people involved in that, but I'm proud to have been a part of it. I believe the next council will be the best one ever.”

Alex Walker, Mayor of Central Hawke’s Bay gave a heartfelt thanks to each of the elected members who had served over the last term. “It’s been a great privilege to serve Central Hawke’s Bay as Mayor over the last term, and to work alongside every member of our council. We have had our challenges and disagreements on some issues, but we’ve all stood strong together as a team for the benefit of our communities.

“I wish to thank each of our councillors for bringing their unique views to the table and for their support, particularly my Deputy Mayor, Councillor Ian Sharp who has stood by me through thick and thin.  I’m so proud of what we’ve achieved.”

Monique Davidson, Chief Executive for Central Hawke’s Bay District Council said: “I want to thank all of our councillors for serving the community of Central Hawke’s Bay over the last three years. Last week’s final meeting of full council was one to be remembered with heartfelt speeches brimming with recollections of past and present, pearls of wisdom for the future, laughter and tears of joy.

“Serving one’s community as an elected member is a great honour which demands courage, conviction, commitment, passion and sacrifice.  It has been a privilege to work for all of the councillors who served over the last term, and I wish Councillor Sharp, Tennent and Burne-Field all the very best for the future.”