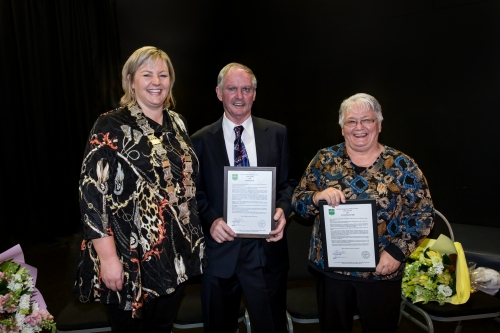 Winners of the Central Hawke’s Bay (CHB) Civic Award 2019 were recognised for their outstanding voluntary service to the community of CHB at a special ceremony held last night at the Waipawa Municipal Theatre.

The annual awards were established in 1990, and since then over 70 volunteers have received the award for their outstanding contribution to the CHB community.

The 2019 Civic Award winners, Pauline Mackie and Lynn Cross were among a number of nominated candidates recognised for their ongoing voluntary contribution. Lynn Cross has dedicated many years of service to a number of community organisations in CHB. His services and achievements include chairman of the Waipukurau branch of St John’s ambulance, treasurer and chairman of Lakeview Kindergarten and scout leader for the Waipukurau Scouts, among others. His contribution to the Waipukurau Lions’ Club spanned over 20 years, with an active involvement in organising fundraisers and various projects.

Pauline Mackie served as president of the Ongaonga Historical Society for 18 years which, under her leadership, saw the development of the village museum. Co-founder of the Ongaonga Playcentre, Pauline was involved in a number of community projects designed to teach children life skills. She was also responsible for running CHB’s Riding for the Disabled for over 25 years. She is passionate about Ongaonga and continues to serve as a local tour guide.

Mayor of Central Hawke’s Bay, Alex Walker said “The annual Civic Awards is our small way of recognising the big contribution and ongoing dedication of individuals who tirelessly give their energy to helping others.  Both Pauline and Lynn have quietly dedicated their time over many years to our community and it’s important we recognise their efforts. Our volunteers are the backbone of our community and I can’t thank nor congratulate our nominated candidates and winners enough for their contributions.”