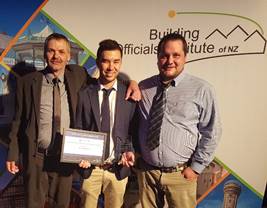 Ben started at Central Hawke’s Bay District Council in 2017 with no prior experience in the building industry or in local government. He quickly progressed from cadet to officer and broke all records for the speed in which he developed and qualified as a Building Consents Officer.

This year Ben was nominated for the SOLGM Accelerated Leaders Programme and is working with other emerging leaders from across the North Island on joint programmes of work and projects that go beyond just the Building Control environment.

Monique Davidson, Chief Executive at Central Hawkes Bay District Council says: “People are our greatest asset and we are proud to have one of our rising young stars recognised at a national level for his dedication and commitment to the Building Industry.

“Ben has made a big impact early on in his career as a champion for continuous improvement and innovation and as a young leader in his profession. I’m proud to lead a team of people like Ben who work hard to improve and deliver better services to our communities so they can thrive.”

Ben was taken by surprise at last night’s award ceremony and says: “I had no idea that I'd been nominated, so it was bit of a shock at first!  I’m stoked and am so grateful for the support of the people I work with, especially my manager Murray Lougher who has been my mentor since I started. I’m lucky to be a part of an awesome team at the council.”