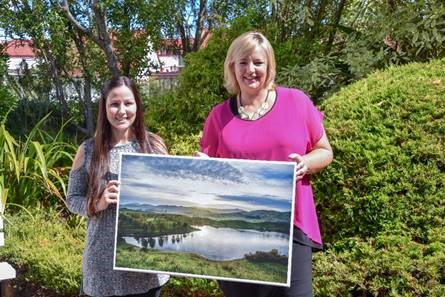 The Central Hawke’s Bay District Council has unveiled the highly anticipated results of its photo competition, run over the summer break with Morgan Dysart recently announced as the winner with her stunning photo of Horseshoe Lake.

Launched at the start of summer, the competition was an opportunity for amateur or professional photographers to showcase the best of Central Hawke’s Bay captured through their eyes. Photographers were invited to capture memorable images - from vast landscapes, breathtaking scenes, to images that capture the everyday people and true essence of our amazing district.

Local photographer Morgan Dysart was voted the winner of the ‘People’s Choice Award’ and was also chosen by Mayor Alex as the Overall Competition winner with her stunning photo of Horseshoe Lake.

Horseshoe Lake is part of Mangarara Station, a country farm in Elsthorpe, and is the stunning view experienced by guests who stay at the Mangarara Eco Lodge. More information available on mangarara.co.nz

Morgan was delighted with winning the competition and received the ultimate prize of a Go Pro in addition to a $100 prezzy card for the People’s Choice Award.

“We are so fortunate in Central Hawke’s Bay to have an abundance of amazing and varied landscapes. I think the competition is a fantastic promotion of the beautiful area we live in,” says Morgan.