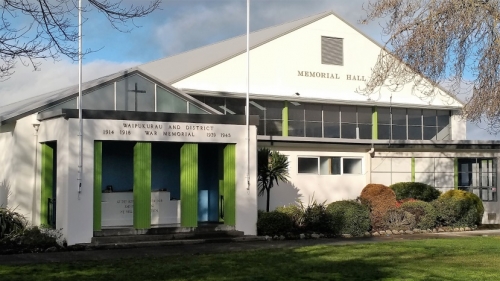 At 11 am on the 11th of November this year, we will remember the one-hundredth anniversary of the armistice that ended World War 1.  For the past four years, Central Hawke’s Bay, along with communities across the whole of New Zealand, have been recognising those that lost their lives through Fields of Remembrance.  The white crosses have been a stark and emotional reminder of the sacrifices that were made.

This November, a District Civic Service for the Central Hawke’s Bay District will be held in conjunction with our Returned Servicemen’s Associations of Waipukurau, Waipawa and Takapau. Our Field of Remembrance will include white crosses to honour every one of the more than 200 Central Hawke’s Bay service personnel that lost their lives during WW1 and whom we recognise on our cenotaphs around the District.

The District Civic Service will be held at Nelly Jull Park in Waipawa on Sunday 11 November at 11am, when white crosses representing the loss of 1918 will be laid. Community groups that have hosted their own Fields of Remembrance around the district for the past four years will be asked to participate if they wish.

To keep up to date with details of the Service, the community should follow Council’s weekly Keeping it Central column in the CHB Mail, Councils Facebook Page and website.