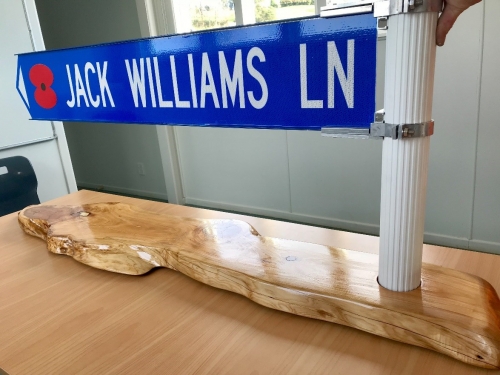 Private Jack Williams was returned back to New Zealand on 21 August, 2018.

On Friday 24th August a plaque was unveiled for Private Williams at Central Hawke’s Bay College, which he was a former student of.

Following that on Saturday 25th August Private Williams was reinterred at the Waipukurau Cemetery which will be his final resting place.

Prior to his reinterment, a service was held at The Terrace School, Waipukurau.

Her Worship the Mayor speaking at the service, acknoweldged the ultimate sacrifice that Private Jack Williams paid, and the privilege she had on behalf of the Central Hawke’s Bay District to acknowledge him and his family through unveilling the name of Jack Williams Lane as a sign of the bravery in battle.

“Today we come together to acknowledge, and pay respects to Jack and his family. I am so privileged to, on behalf of the Central Hawke’s Bay community welcome Jack home, and provide a long standing legacy for him” says Mayor, Alex Walker.

Bruce Turfrey, Local Developer who is currently completing a new 11 unit retirement sub division in Russell Street and River terrace in Waipukurau approached the Council suggesting the naming of the street off Russell Street as “Jack Williams Lane”.

“The Williams family have always been like close family to me, I always looked up to Jack. When the opportunity came to suggest a street name, it seemed only right that I suggest this in Jack’s memory”, says Bruce Turfrey.

Speaking on behalf of the family, Private Jack Williams brother, Wayne Williams said, “This is a wonderful thing to happen and provides a legacy for more than just our family but this community and the military community also. We are very honoured by this request, and know that Jack would be stunned by the amazing homecoming he has had”.

Private Williams, who attended The Terrace School and CHB College, was serving with 3 Platoon Victor 4 Infantry Company when he was killed in a Viet Cong ambush in Phuoc Tuy Province, South Vietnam, on June 17, 1969, at age 20.