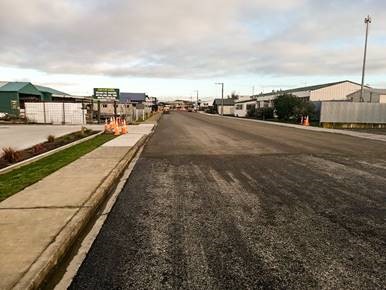 Work on Peel Street has now completed with the recent resealing of the road this week.  The newly constructed road is set to reopen Thursday 19 July upon completion of the road marking.

Council instigated the Peel Street Rebuild due to ongoing past road surface failures, where upon investigations found the supporting structure of the road was insufficient to support the current traffic loading accentuated by increased commercial vehicles movements.

Focussing on Councils key objectives from Project THRIVE, a proactive approach to ensure durable infrastructure and smart growth resulted was taken.  To strengthen the road structure Peel St was excavated to a depth of 550mm and replaced with new granular material. Council made a cost benefit decision to incorporate the upgrade of the existing water main as part of the excavation works. The installation of a new 150mm water pipe from Herbert Street to Northumberland Street and a 250mm pipe between Peel Street and Marlborough Street in addition to new service connections to nearby properties will allow for an increase in water carrying capacity. This will improve the future resilience of the Council’s low pressure water-main system in the area.

Alignment improvements to the kerb and channel and the construction of a new robust hotmix surface will allow better commercial vehicle traffic flow around the Peel / Herbert intersection.

The Council recognised that the Peel Street reconstruction works would significantly impact on businesses and required considerable public engagement and consultation.  Together with local businesses and the contractor, an approach to how the works could be delivered was jointly developed with a full road closure being adopted.

Preparations for the works began in mid-April 2018 for the water-main upgrades, which included setting up of the traffic management, by mid-May Peel Street was closed to through traffic to enable the road pavement to be rebuilt. Detours were put in place with southbound traffic using Herbert Street, Russell Street and Bogle Brothers Esplanade. Northbound traffic gained access to the State Highway via a detour on Northumberland Street and Marlborough Street.

The weather has caused delays to the project and Council would like to thank local businesses and the local community for their patience.

“The Peel Street Project is a major piece of work for Central Hawke’s Bay District and has been delivered within budget.  We have focussed on our Communities objectives from Project THRIVE, and have delivered smart growth and durable infrastructure, achieving the best long term benefits for our community” says Josh Lloyd, Group Manager – Community Development and Infrastructure.

Regular communications and project updates provided by Higgins ensured local businesses impacted by the works were well informed. Their assistance has ensured the businesses were able to operate and plan ahead to accommodate changes.

Local business owner, Nichola Hayes of CHB Funeral Services said, “Higgins did a fantastic job of communicating updates on the Peel Street project. They were very considerate and stopped work on site when funerals were taking place. We would also like to extend our thanks to the public for their patience when attending funerals”.