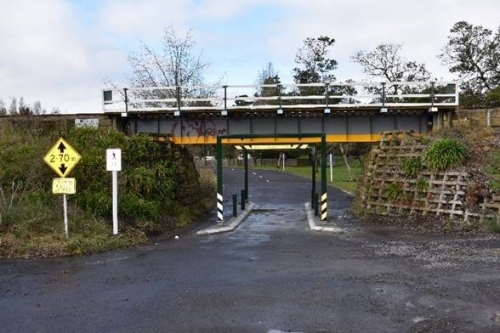 The recent reopening of Harker Street has received acclaim from local residents and motorists.

Harker Street is an important access route connecting the local community, local businesses and nearby Waipawa Primary school. The removal of bollards allow access, with the remaining tidy up works and line marking to take place this week.

Harker Street was officially named after Cyril Harker, a local Waipawa resident and Mayor of the Waipawa Borough from 1935 to 1938. Cyril, a JP, returned solider and OBE recipient was highly regarded in the community. Cyril died in 1970 at the age of 80 and is buried in the Hadley part of the Waipawa cemetery.

Access via the overbridge was temporarily closed in July 2014. KiwiRail through Riverside Construction Ltd carried out repairs to the damaged bridge. Concrete blocks were put in place to restrict traffic access however pedestrians were able to gain access as a temporary measure.

The Harker Street Rail Overbridge is a Kiwi Rail owned and operated structure. KiwiRail granted access to Council for the Harker St Road alignment which passes under the rail line. From Victoria St, through to the rail corridor, the road is designated as a public road reserve, whereas from the rail corridor through to its intersection with SH2, the road is designated as Council Reserve. Under the KiwiRail access agreement, Council are deemed liable for any damage which may arise as a result of the public access.

A long term solution was agreed by Council to provide access to light vehicles, cars, pedestrians and cyclists. The width within the underpass has been reduced and a height restriction placed in advance of the rail structure on both sides to allow access for normal passenger vehicles and not larger vehicles, which would have the potential to damage the rail bridge.  There is also separated access for pedestrians and cyclists to enhance their safety.

Council would like to thank the local community for their patience while the work was undertaken to the overbridge.

An official opening of Harker St will take place on Tuesday 19 June at 2.15pm and everyone is welcome.