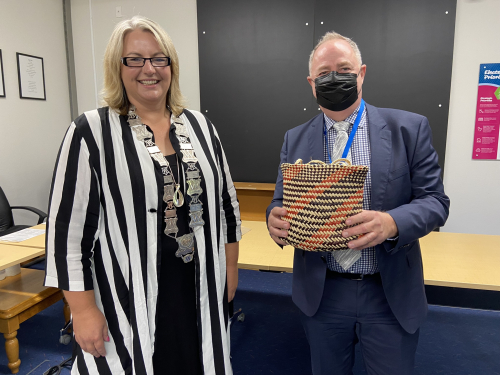 The next phase in the development of the new District Plan for Central Hawke’s Bay is underway, following independent Commissioners being welcomed to the District by local mana whenua.

Under the Resource Management Act 1991, all councils are required to have a District Plan. With the current District Plan nearly twenty years old, the review of the plan was a key tool prioritised in achieving the vision developed with community during the development of Project Thrive in 2017.  The Proposed District Plan was developed from a Draft District Plan that was put together with comprehensive community input.  Following the formal notification of the plan in May 2021, submissions have since been received, a call for further submissions sought, with these submissions now being collated and the first of seven topic hearings of the submissions by Commissioners commencing this week.

The first of seven topics to be heard this week is the natural and coastal environment, with matters related to the urban environment, sustainability and general district-wide matters to be heard from March 30 to April 1. The remaining five topic groups are rural environment; tangata whenua and historic heritage; hazards and risks, and subdivisions; miscellaneous, introduction, and rezoning; energy, infrastructure, and transport.

Over March 14 and 15, submitters who have asked to be heard on matters related to the natural and coastal environment will present their submissions to the Commissioners.  It is expected that all of the hearings will be held by the end of September, after which reporting officers will prepare reports on the submissions and the commissioners recommendations, to be presented to Council with the Proposed District Plan, likely to be in early 2023.

“It’s pleasing that we continue to make positive progress on this transformational project”, says Chief Executive Monique Davidson.  “The commencement of hearings is a further key step as we work towards achieving a new District Plan for this District.”

The hearings will be public, however only those who have made submissions and indicated they wish to present their submission in person will be able to speak. Under the red traffic light COVID setting, links to enable the general public to watch on line can be found on the District Council’s website searching District Plan.

The full suite of information on the Proposed District Plan, including the hearing topics and dates (as they become available), the commissioners, and information for submitters, is available on Council’s website.