Kairakau Road Re-open: One Lane Access to Through-Traffic a Week Earlier Than Scheduled 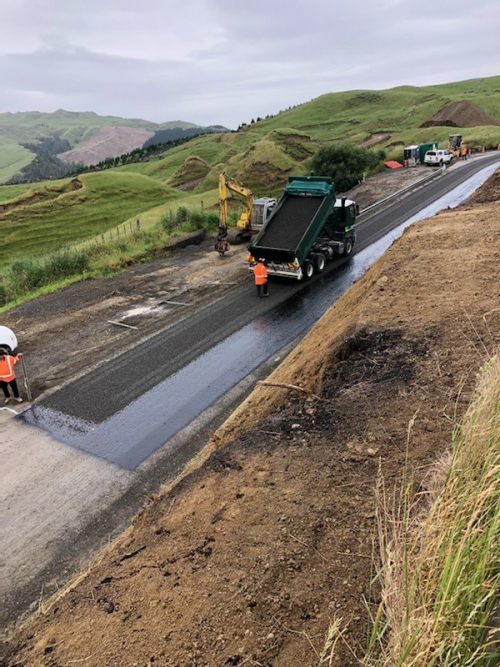 Kairakau Road is now open to one lane a full week earlier than scheduled, after Central Hawke’s Bay District Council and contracting partner Higgins worked at pace to design and build a new section of road.

This follows the unexpected closure of the road at the 7.1km mark after a significant natural land slip took place on Sunday 7 November.

Traffic will be controlled by safety signage, a 30km speed limit and priority give-way. Higgins will continue to monitor the lane on a daily basis.

Chief Executive of the District Council, Monique Davidson, said she is ecstatic that the Kairakau Road is reopen to through-traffic a week earlier than scheduled.

“Council and our trusted partner Higgins have worked with specialist engineers as a top priority on the first phase of reopening Kairakau Road,” said Ms Davidson.

“We promised that traffic would be able to pass through Kairakau Road by Christmas, and I’m happy to announce that as from today this is a reality.”

Thorough investigations revealed that a repair or rebuild of the failed section of road on the same site would not have been a long term effective option due to the instability of the ground beneath the existing road. Instead, stage one of the road’s rebuild was to build a small road retreat.

Planning is still underway into the permanent two lane solution with road construction likely to start in the first quarter of 2022.

Kairakau Road has been affected by ongoing slow movement over a substantial period of time, with a known slump worsening in the weeks prior to the slip.

Major repairs had been scheduled by Council to remedy the slump, which would have involved the excavation, restabilising and rebuilding of the site, however investigations indicate that the severity of the slip and required rebuild would likely have occurred even if the planned repair works had been already made.

“I whole-heartedly thank all of those in the community who have worked with Council to find solutions to the road’s closure over the past month, and those who have shown such patience and understanding while officers and engineers worked to re-open the road.”