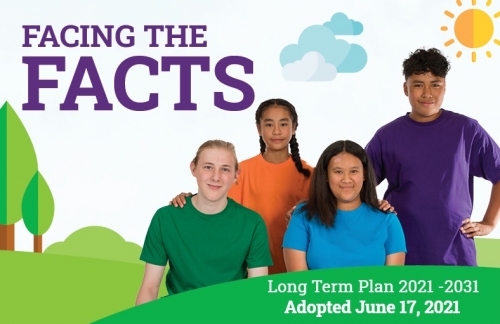 Central Hawke’s Bay District Council is backing significant investment in their core infrastructure with the adoption of a bold Long Term Plan.

On a path to creating a thriving future, the Council and community have faced harsh realities head on and adopted the Long Term Plan 2021 – 2031 in full, during an Extraordinary Council meeting yesterday.

The Long Term Plan (LTP) sets out what Council’s activities, costs, required revenue and rates will be for the next ten years. It’s reviewed every three years and was last revised in 2018.

Council consulted with the community on four key challenges, including plans to repair the District’s wastewater system, paying for growth, funding the replacement of assets and creating a Waste Free CHB.

Yesterday’s approval of the Long Term Plan 2021-2031, legally confirmed Council’s decisions made during Deliberation meetings in May, and strikes the rate for the 2021/22 financial year.

Central Hawke’s Bay Mayor Alex Walker said: “This is a plan that has been coming together, with our wastewater pond upgrade project at the heart of it, for about four years now. The reality is, if we are going to address our regulatory environmental and economic responsibilities, this has to be the strategy.

“This plan is going to be hard work - it’s going to put financial pressure onto not just this Council, but our rate payers who are contributing as we roll through the next period of years. There has been a very open and honest dialog from us, from our staff and with the community.

“I think we have listened carefully, and the community have understood on the whole, that we have very few options but to face up to this. To have this scale of LTP has been something that’s required to set ourselves up for the future.”

Through the adoption of the Long Term Plan, Council confirmed its approach to make an investment of $68.5 million to upgrade the District’s Wastewater Treatment Plants and remove discharges from rivers, within the next 15 years.

They confirmed debt funding of renewals for the first five years of the LTP, in order to catch up on essential infrastructure renewal and upgrades. Beyond this, renewals will substantially return to being rates funded.

Council will push forward with a definitive plan to future proof solid waste services in the District, including the extension of kerbside recycling to rural communities of Otane, Takapau, Tikokino, Ongaonga and the provision of a third recycling bin for Waipawa and Waipukurau.

Recycling drop-off centres in Otane, Takapau, Tikokino and Ongaonga will be closed, and new targeted recycling trailers set to service other rural centres throughout the District for the first time. The current rubbish bag service will end in Year three of the Long Term Plan (July 2023), to be replaced with a wheeled refuse bin.

In order to pay for unprecedented growth in the District, a Proposed Development Contributions Policy was adopted, with immediate effect, seeing developers pay for 100 per cent of costs associated with growth identified in the plan.

Addressing other challenges and opportunities in the District, Council included an additional $200,000 through the life of the LTP, to progress the sealing of unsealed roads in Central Hawke’s Bay.

Increases will continue over the plan’s ten-year span, recognising major underinvestment that had to be addressed. Changes outlined in the Long Term Plan 2021-2031 will come into effect from July 1, 2021.

Mayor Alex Walker, noted Council’s approach was always to deliver a plan that would see Central Hawke’s Bay thrive, not just today, but well into the future. How that looks is now clearer than ever before.

“We have to be careful not to think that we are just an old CHB, we have a long history of our people, of our tangata whenua, of our place here. But in 2021, we are also a new Central Hawke’s Bay - we have more people than ever before, we are building houses faster than ever before, there’s more innovation across business and farming arenas than ever before.”

“The idea is to invest for the future and ask ourselves what kind of ancestors do we want to be? There is a thriving CHB out there and I am very proud to be here adopting a Long Term Plan that reflects this.”