What causes the issues?

Landslips are an ongoing issue across the Central Hawkes Bay and continue to cause major disruptions to the districts roading network.

Hill slopes that are normally stable, can be triggered into instability by a number of activities such as: 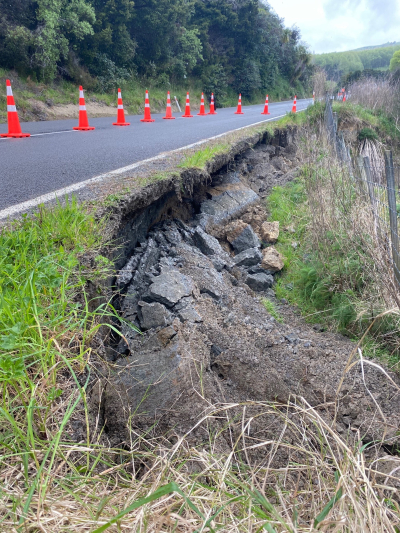 The geological conditions of the region play a large part in the areas susceptibility to slips. The soils throughout the Central Hawkes Bay are typically derived from soft mudstone rocks, which decompose to weak clays and silts. These ground conditions are particularly vulnerable to slips in heavy or prolonged rain events.

Much of the region’s land also consists of steep slopes which have been previously cleared for forestry, farming or roading. During heavy rain events the shallow soils that were previously strengthened by root systems are saturated and weakened, which can cause a failure of the soils inherent strength. This results in the movement of the wet upper soil layers down the slope (a “landslip”). As the soils move down the slopes, this causes a dropping of the earth at the top and bulging of soil the base. Dependent on the location of the road relative to the hill side, this can result in cracking of the road surface, potholes and uneven ground, dropouts of the shoulder or spillage of soil into the roadway.

Due to the extensive rain we’ve experienced this year, the land and hill slopes of the region have remained sodden for an extended period, allowing this process to continue and trigger further slips. The excessive rain also increases the volumes and flows in the local rivers and streams, causing additional undercutting at the base of hillslopes, further driving the likelihood of land slips.

There’s no doubting the increase in rainfall is a contributing factor to the significant increase in damage to our roads this year. Based on what we know and understand about the changing climate, this is likely to become the new normal rather than an isolated occurrence. Combining this fact with the basic science behind how slips and pot holes occur, there is an obvious need to take a long-term view of this project. Whilst Council is committed to addressing the existing damage with as much urgency as possible, there is also a focus on how this can be managed in future years.