Following the HPMV Evaluation in accordance with the NZTA Bridge Manual of twenty (20) bridge and culvert structures on Porangahau & Wimbledon road as part of the Porangahau and Wimbledon Roads PGF Project, a total of eight (8) structures have been identified as not being capable or carrying full HPMV vehicle loading.

The Porangahau and Wimbledon Road Upgrade will include projects to strengthen these structures to provide future generations with safe and durable roading infrastructure along what is a key thoroughfare in our district.

After detailed design in late 2021, works to strengthen the bridge started in early 2022. The team poured concrete and reinforced the structure to handle heavy vehicles.

The bridge was fully reopened in June 2022. 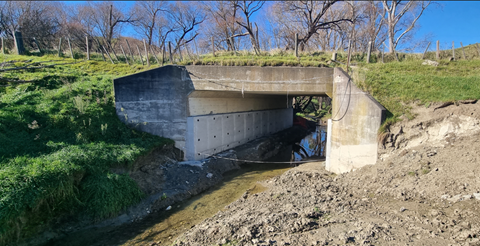 Work to strengthen this bridge is well underway and we expect the upgrades to be completed this month. Detailed design is complete and work is expected to start in late February 2022. 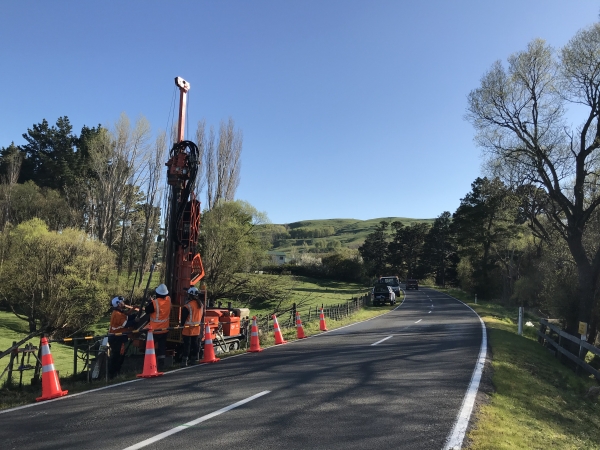 You can view a map of the progress here

A team made up entirely of local people employed by our contractor, Concrete Structures Ltd, worked to strengthen Wallingford Bridge from early 2021. Almost 4000 holes were drilled to install bolts that connected a new deck to the existing bridge. New concrete was poured, and the team finished off with chip sealing, new guardrails, resealing, and road marking.

The strengthening works on Wallingford bridge has now been completed, with some minor remedial works to be undertaken on the seal. 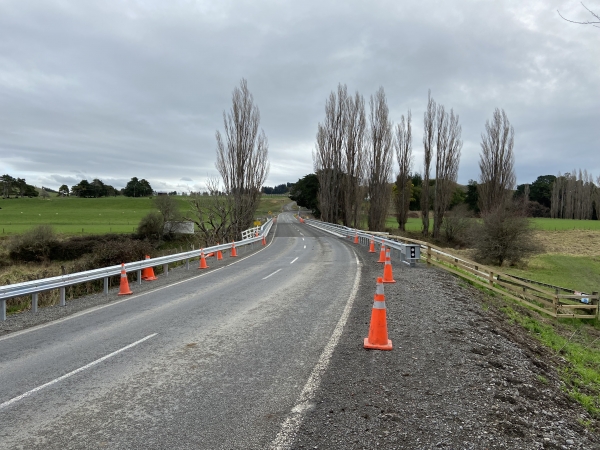 The strengthening works on Wallingford bridge is now 95% complete, with only surfacing and line marking to be completed once the weather settles, planned for first week in November 2021.

This first bridge upgrade is currently employed by an all CHB local team and has one new employee through the Mayors Taskforce For Jobs, with another looking to start this week. We expect to start works on the next bridge ‘Kokomoko’ in the next month. 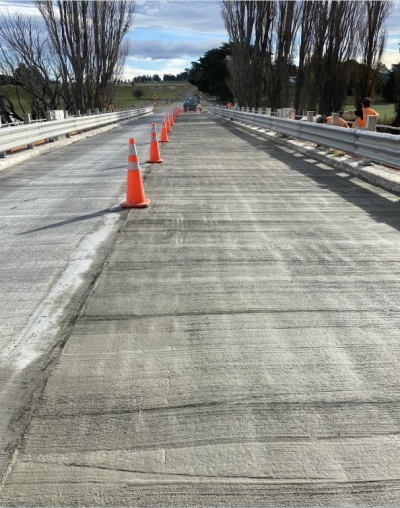 Work commenced in late 2021 to strengthen the existing bridge, but due to findings related to the condition of the bridge, we were unable to go ahead with these plans.

While the team worked to design a new bridge, traffic was diverted to a safe, temporary bridge alongside the existing structure.

The new bridge was completed over six months and fully opened to traffic during the opening ceremony and blessing in May 2022. 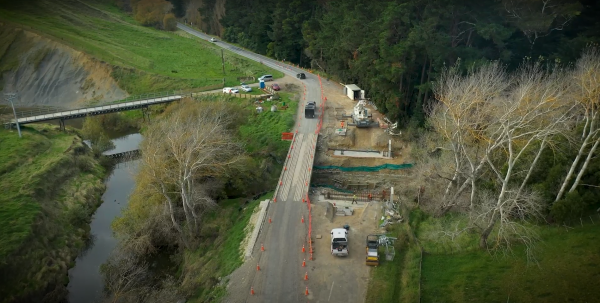 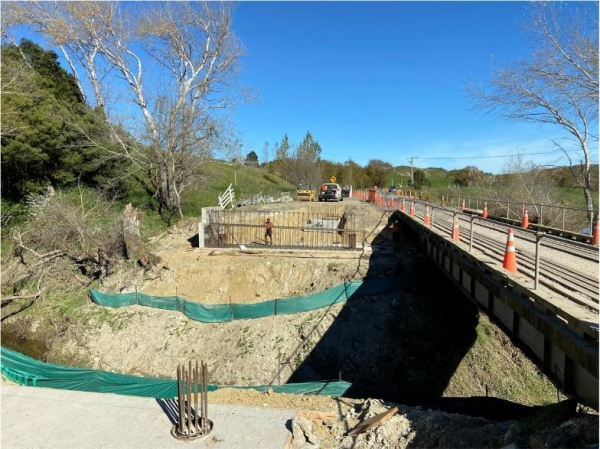 The heavy rain in March 2022 impacted our progress on Kokomoko Bridge. Although the team have been delayed, they continue to make great progress strengthening this bridge. In early May, 9 beams were delivered to site that will support the new bridge. They are currently being lowered into place and secured!

Check out our progress in the below photos. 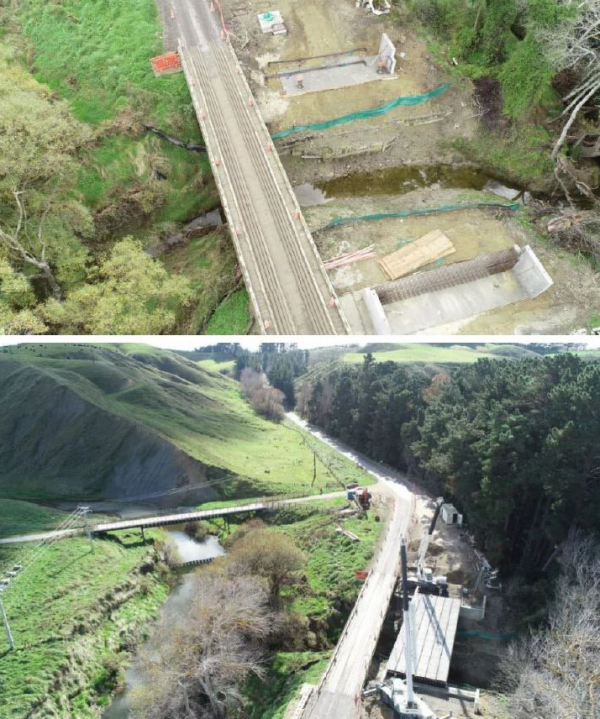 We want to thank you for your patience during this project and would like to remind drivers to follow the temporary speed limits. 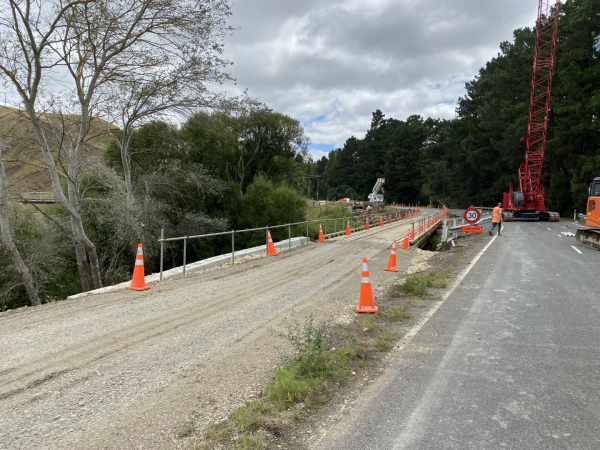 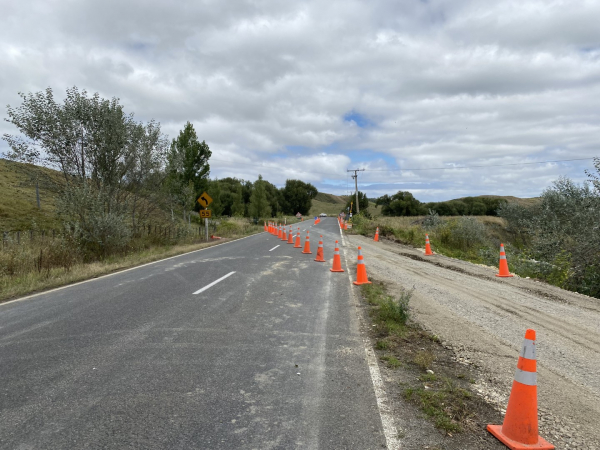 While we have made good progress on our works across Pōrangahau and Wimbledon Road, and seeeing a number of safety improvements through retaining walls being built, resilience added to both roads, and bridges replaced or strengthened, works are about to commence at Kokomoko Bridge on Pōrangahau Road from 31 January 2022.

The works at Kokomoko are planned to continue through from next week through to June/ July 2022.

We would like to assure you that the temporary bridge can handle heavy vehicle loading, but we ask that all road users comply with the speed restrictions and traffic lights controlling the bridge.

This is an important part of our externally funded PGF works - where we are improving safety and resilience of the roads to handle current and future traffic including the increase in heavy vehicles, once the programme of work across the route is completed – the route will see all bridges rated as able to take heavy or HPMV vehicles.

Check out our Kokomoko Fact Sheet for more information including FAQ's. September 2021: Following the completion of an assessment of the bridge it was determined that to make the Porangahau Road/Wimbledon Road route HPMV capable Bridge 174 Kokomoko would require strengthening.The proposed works are to strengthen the abutments by installing concrete columns directly to the front face to enable the abutments and beams to work together. A Traffic Management Plan will be developed to implement the restriction of the bridge to a single 3.7m wide central lane with a 10km/h speed restriction in order to keep the road open and safe for use.
The traffic management and width restriction on the bridge will be kept in place until strengthening works of the bridge have been completed. Work on strengthening Saleyards Bridge started in early 2022, with most of the work being done under the bridge. The upgrades were to ensure the structure could handle heavy vehicles by strengthening the bridge cantilever and beams with carbon fibre.

The final additions included a new guardrail and abutment upgrades, and the bridge was fully reopened in June 2022.

Work on this bridge is now complete! The upgrades mean the bridge can now handle heavy trucks (over 62 tonnes). A new guardrail and abutment upgrades connecting the bridges are planned for the coming months.

Work has commenced on strengthening Saleyards bridge with most of the work being done under the bridge. The upgrades are to allow the bridge to handle HPMV, heavy motor vehicle capacity (over 62 tonnes) by strengthening the bridge cantilever and beams with carbon fibre. A new guardrail and abutment upgrades connecting the bridges are planned for the coming months. 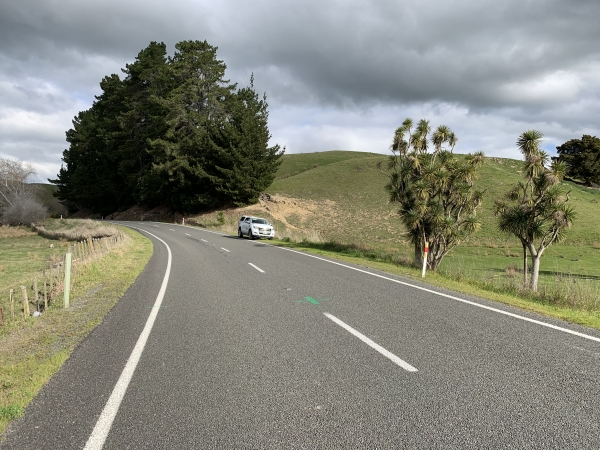 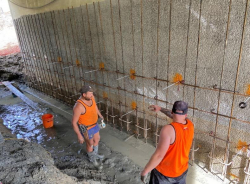 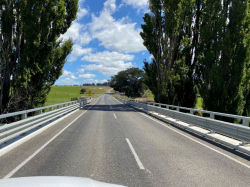