For further detail on individual projects, click the drop down links below.

Council has completed a rigorous tender process and has awarded the contract for portion 2 and 3 to Fulton Hogan Ltd.

Works are expected to start on Separable Portion 3 - Savage Crescent, Carpenter Street and Churchill Street Improvements in early July 2019 to up size and extend the stormwater network as well as replace sumps and pits to improve network performance.

Following this piece of work, the team will move to Woburn and Wilder Street to extend the stormwater network to an open drain. Works are expected to take approx. 4 months, and be completed by December 2019.

Council has released this tender to the market as we aim to engage a suitable contractor to undertake these works.

Council has proposed 3 separable portions (SP) to this project as outlined below;

A project has begun to improve the stormwater network in Waipukurau and reduce flooding. Council is currently defining the scope and design with our consultant to evaluate where best to focus our attention.

The main road reinstatement is now complete, and except for a few minor repairs around valve boxes to be tidied in the new year, works are complete. 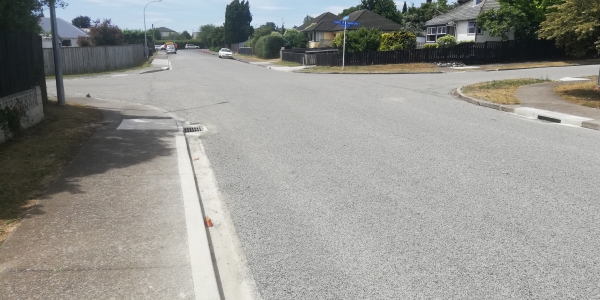 The main road reinstatement is underway, involving a full rebuild from kerb to kerb. 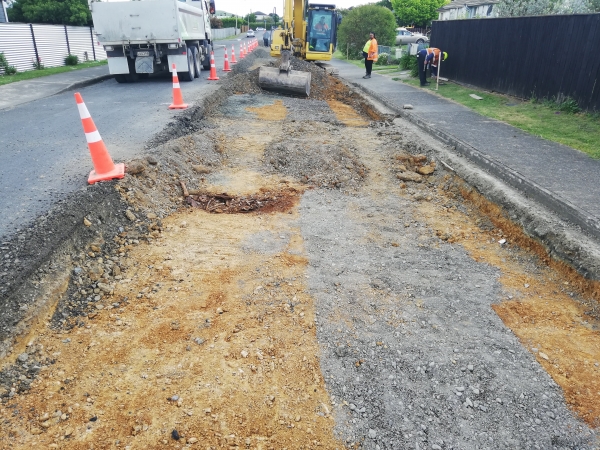 The main road reinstatement has now been designed by Opus, and Downer have been booked in to start on Monday 18th November 2019.

The reason for the delay is due to the road requiring a full re-construction.

Work is expected to be complete by Friday 6th December 2019.

Please find a link to the flyer that was letter dropped to residents this week.

Our roading team is still working with other contractors to complete the remaining reinstatement in Carpenter/ Savage crescent. 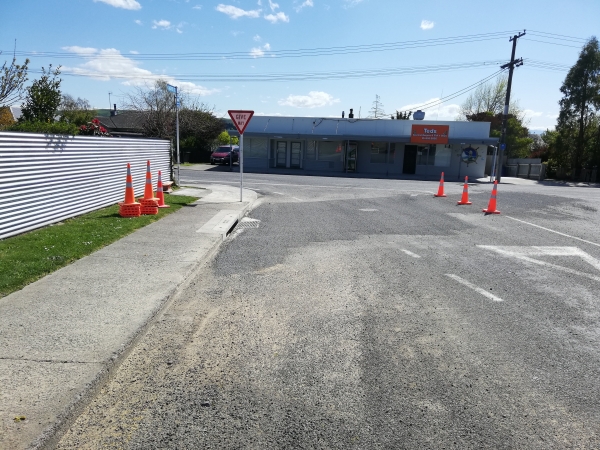 Churchill and Carpenter Street’s section of reinstatement is waiting on a final design to be completed to rebuild the road due to its current poor condition. Residents will be informed shortly on the timeline to complete this section.

Work is now complete and only road reinstatement remains. The team now shift to Woburn and Wilder.

Fulton Hogan have completed the installation of the new Stormwater Network in Churchill and Carpenter Streets.

Work is currently underway to reconstruct footpaths and kerb, Once these are completed work will then begin on reconstructing the sealed road section. Work is also underway installing three new max-sumps and the bottom end on Churchill St and Gaisford Tce to allow the Stormwater flowing down the kerb and channel better access into the Stormwater network.

Work will commence in Woburn St once these sumps are installed. 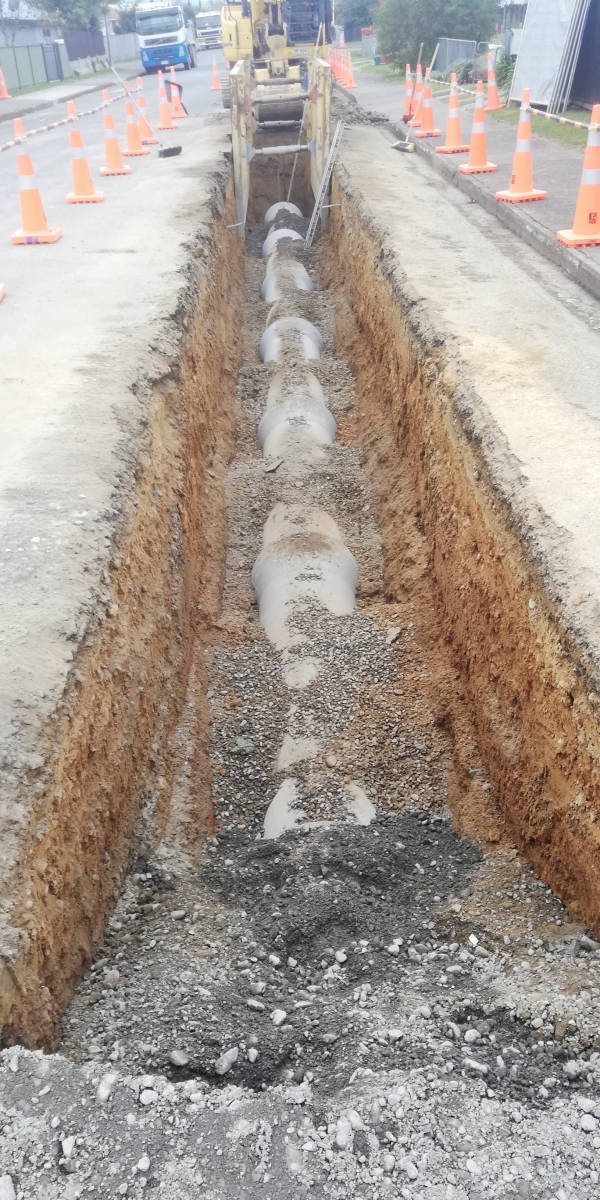 Contractors Fulton Hogan have made a good start on this project in Churchill Street, Waipukurau to install a new Stormwater network that runs along Carpenter Street from the Cobham Crescent intersection and into Churchill Street.

This section of works is the first of two to be undertaken in this current project. Significant traffic management is in place as we lay a large stormwater pipe to increase capacity, and re-direct the flows along Carpenter Street towards Churchill Street. Fulton Hogan are currently establishing on site and carrying initial site investigations which include locating underground services. Physical works are expected to start later this week in Churchill St with the first manhole and lengths of pipe to be installed.

The linked letter is being distributed to all households that may be affected by the works with an update this week.

The works are proposed to install 300m of new stormwater pipes, 4 new manholes and 13 new kerb sumps, to improve performance of the stormwater network and reduce flooding, there will,be traffic management in place for the duration of the works..

Hours of work are proposed from 7-00am to 6-00pm Monday to Friday, with the occasional Saturday.

Fulton Hogan Ltd have been awarded this project, and are to start works on this section from 1 July 2019 where they will up size and extend the stormwater network as well as replace sumps and pits to improve network performance. 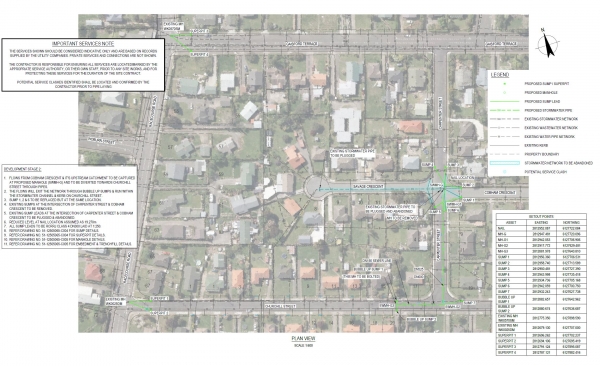 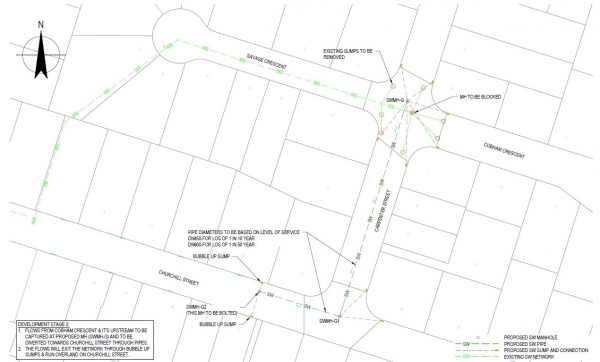 Cones have been removed and the site handed back to council as complete! The project has pleasingly reached completion, and reinstatement is finished.

This project was undertaken to improve known flooding issues in Waipukurau, and to redirect Stormwater flows to an open drain at the back of these properties, it involved installing new concrete pipe network, new sumps and pits to receive the flows, re shaping driveways and roads to divert stormwater to the new pits, as well as creating an overland flow path as a secondary flow to the open drain.

Working with a couple of highly affected landowners this project has also been a success for the team and we expect to have relieved some of the flood risk on these properties. 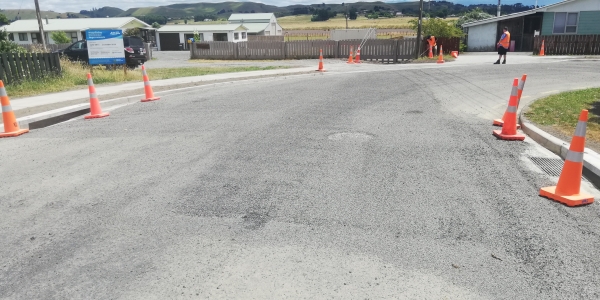 The team continues to shape the driveway and swale and reinstate the footpaths.

Reinstatement of the road is underway. Works are on track to be completed by the end of November 2019. Now that the sunnier weather is upon is, we are working on the reinstatement, and expect to have all work completed by the end of November 2019. 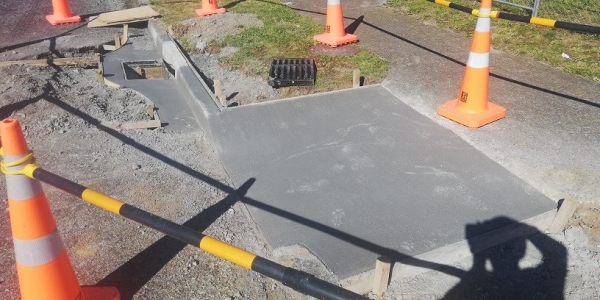 Following the rain this week, it is pleasing to see the new drains working well and receiving the flow and distributing it into the drain network.

Once the rain eases, and we have a spell of dry weather - Fulton Hogan will be reinstating the road, footpaths and driveways, which will involve shaping and forming the final levels to divert water flow naturally. 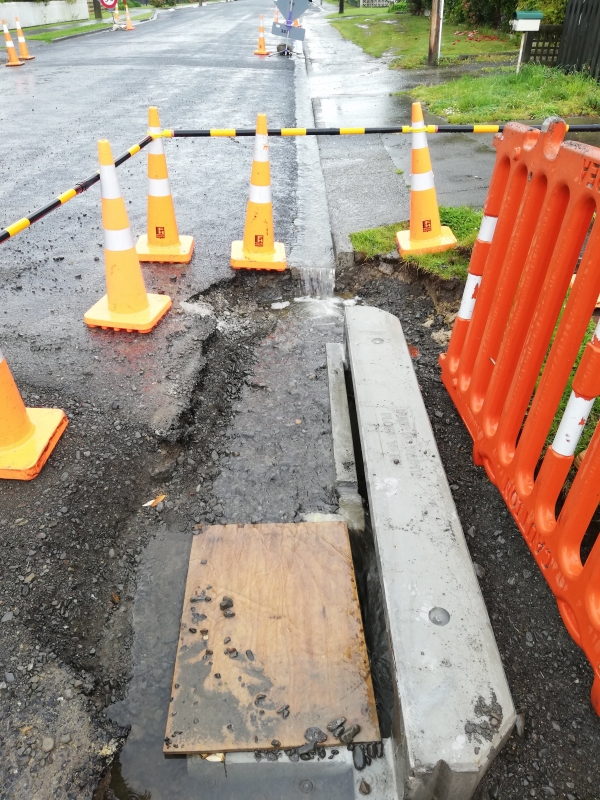 All the new Stormwater pipework with the private property has been completed, work is underway within the road corridor. The area within the road involves installing four new kerbline drainage sumps, a new manhole connecting into the new stormwater network.

Works is expected to be completed by Friday 18th October with the reinstatement work to be started that week after. This pipe is stage one of a proposed Stormwater Network along Woburn Street in the future years. Work also involved realigning a short section of the Sewer Network to allow the SW pipe installation to proceed. 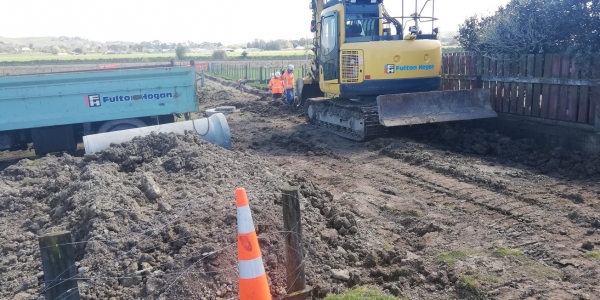 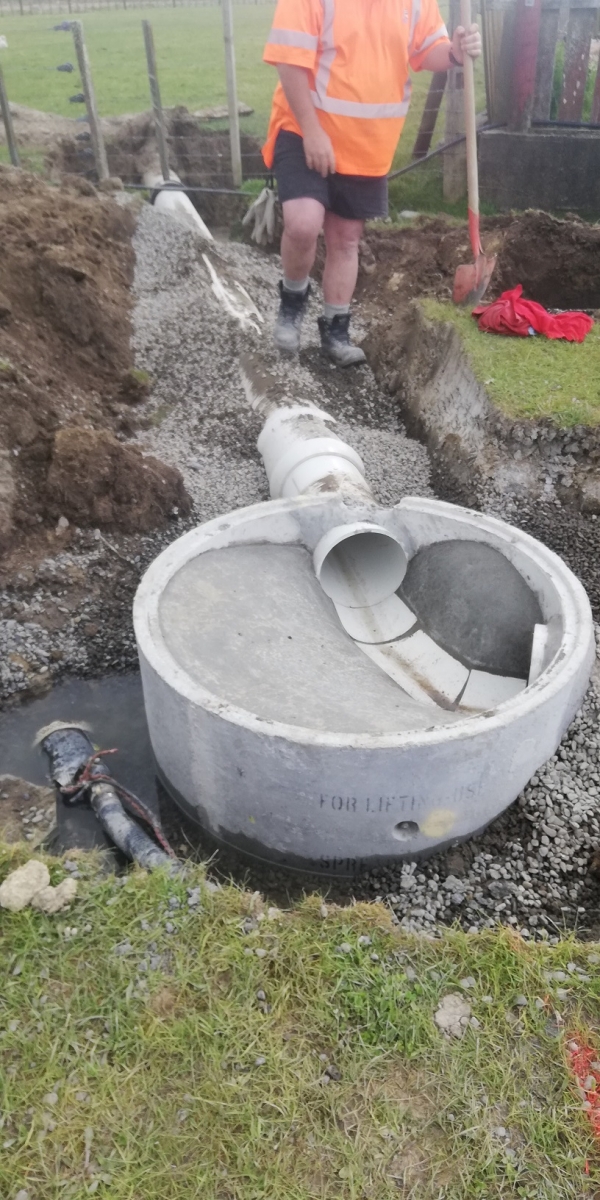 An easement is planned to be established through 25 Woburn Street to provide a flow path to the open drain located parallel to Wilder Street and a route for piped infrastructure.

This improvement is very important considering the future development. It is expected that any rural surface flooding caused by the upstream upgrades would be comparatively minor in nature.

To provide an outlet for the surrounding catchment a stormwater manhole will be constructed at the junction of Woburn and Wilder Street and a DN675 stormwater pipeline would be laid to the open drain.

All the 1 in 10 year overland flows arriving at the end of the Woburn Street would be collected through a combination of super-pits and back entry sumps  and conveyed through the pipe and discharged into the open drain. Large flows would pass across the easement in a depressed swale and discharged to the drain. 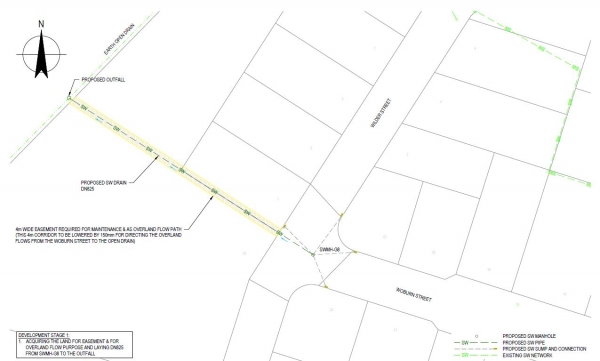 This portion of work proposes to construct a new secondary overland flow path to diver flood water entering shops in Ruataniwha Street, this would be achieved by lowering the walkway between No 34 and 36 Ruataniwha Street and attenuate the flow within the dish-like profile of the service lane.

A block-wall (450mm high and 35m long) would be constructed to prevent the ponded volume from tipping into timberyard.

The expected ponding volume is approximately 700m2 with a maximum depth of 400mm.

This option has the potential to provide more storage at a later date when the service lane is resurfaced in the next 5-10 years.

Council is currently engaging with landowners and those affected. No works will take place until agreement is obtained. 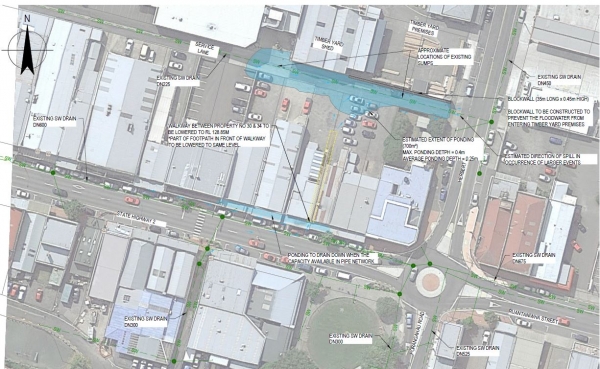